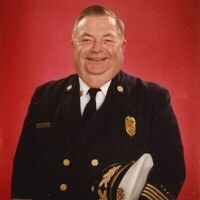 
Services have been set for one of the longest-serving Brighton firefighters, who gave more than half a century of service to the community.

A memorial service will be held this Thursday, June 17th for former Deputy Chief Charles L. Bidwell of the Brighton Area Fire Department. He died June 9th at age 89. The noontime service will take place at Fire Station 31 on W. Grand River. Also known as the authority’s Main Station, it is officially named in Bidwell’s honor.

When he retired in 2000, Bidwell had spent more than 50 years in the fire service, all of it in Brighton. Beginning as a Junior Fire Department volunteer in 1947, Bidwell officially became a Brighton firefighter in 1950, rising through the ranks as a sergeant, lieutenant, captain and eventually Deputy Chief. But his service was not just limited to the fire department. Bidwell was also a reserve Brighton police officer for more than 20 years, served two terms on the Brighton City Council from 1967 – 1975, and then served as Brighton’s Mayor Pro Tem from 1973 – 1975. He was Brighton's Firefighter of the Year in 1987, and then Michigan's Firefighter of the Year in 2000.

Bidwell’s family will receive friends starting at 10am on Thursday at the Station 31, with the memorial service to follow at noon. In lieu of flowers, donations are suggested to the American Red Cross.