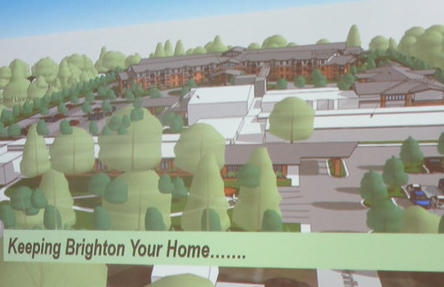 On a split, 6-3 vote, the Brighton City Planning Commission has approved the preliminary site plan for the proposed $34 million senior housing development at the old Lindbom School site.

Holly developer Pat Battaglia plans a 210-unit, 140,000-square-foot senior housing development that would involve both the renovation of the mothballed Lindbom School on State Street and construction of new senior housing. Brighton Village at the Mill Pond, as it is called, would encompass separate centers for independent living, assisted living, a memory care center and an activities center on the 10.5-acre site.

Planning commissioners listened Monday to a large number of comments – the majority, but not all - opposed to the project. All live in the northwest city neighborhood where the complex would be located. Sandra Verhelle of Magnolia St., which is on the Genoa Township side of the property, tells WHMI she moved to the area for its peace and quiet, and the development would disrupt that tranquility.

Although the preliminary site plan was approved, past planning commission chairman Steve Monet and Susan Gardner, who also sits on the City Council, voted against the development, saying it was out of scale with the neighborhood. However, Battaglia said the proposal was not cast in stone and he would be flexible if the city wanted modifications.

Battaglia addressed the issue of the plume of toxic trichloroethylene gas, or TCE, which has contaminated the groundwater in the neighborhood, stemming from an old refrigeration plant on North 5th Street. Battaglia said he would employ mitigation procedures to vent the plume of gas by having vapor barriers installed.

Under the name of American Classical Academy Brighton Holdings LLC, Battaglia’s former company initially purchased the school for $1.45 million from the Brighton Area Schools. He proposed a charter school called the Livingston Classical Academy for the site, but the school board turned down his request to be the sponsor. In 2015 he proposed a senior housing complex for the old Lindbom site, but says his financing fell through. His current proposal is virtually identical to the one which was approved by the Planning Commission in 2015. (TT)