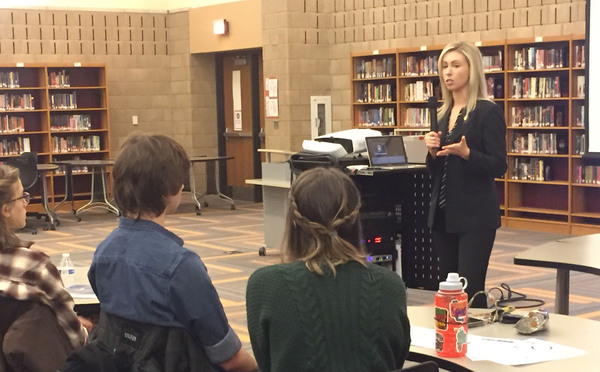 Human trafficking and domestic violence were the subjects of an informational seminar recently hosted by a group of Brighton High School student advocates.

Teens Advocating Against Domestic Assistance, or TADA, drew attention to both issues at the event Tuesday, held at the high school. Guest speakers discussed common signs, myths and the similarities between human trafficking and domestic violence, as well as what can be done to prevent or put an end to each.

LACASA Youth Prevention Services Coordinator Kayla Grant says both situations can begin with the “Romeo Effect”, in which the trafficker or abuser appears sweet at first, then slowly gains control over time. Grant says “Romeo” will groom the victim into a state of isolation and eventually, possession. Special Agent Amy Tanana of Homeland Security Investigations agreed, saying there is a similar pattern when a victim descends into an abuser or trafficker’s control.

Tanana says some indicators that a person may be a victim of trafficking are a sense of fearfulness, noticeable marks on their body indicating abuse or a controlling figure that is constantly with them; signs that can also apply to victims of dating violence. Tanana and Grant also worked to dispel common myths among the two subjects, both saying that victims of each don’t always know that they’re victims.

For parents at the meeting, Tanana and Grant recommended they pay attention to who their child is hanging out with or talking to as cell phones and social media can be used as avenues to connect with a potential victim.

The National Human Trafficking Hotline received 958 leads in Michigan in 2017, however Tanana says trafficking statistics are hard to pin down because victims don’t always come forward or are unable to. She says this form of “modern-day slavery” is extremely profitable, as humans can be sold over and over again, unlike drug trafficking.

With awareness as the central focus, attendees were reminded that domestic violence and human trafficking do not discriminate based on demographics, meaning either can happen to anyone at anytime, anywhere. (DK)