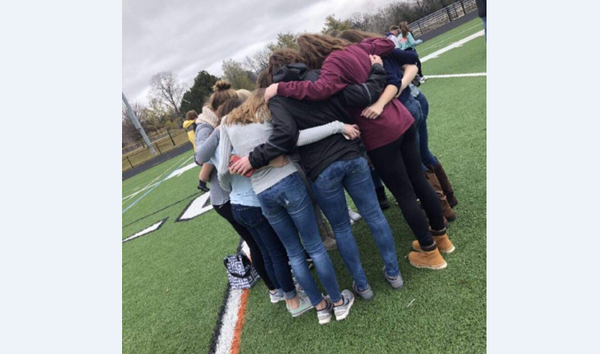 Since last week’s tragic Florida school shooting, officials say young people across the country have been looking for ways to become activists and fight against school violence. That’s exactly what a large number of students from Scranton Middle School in Brighton did Wednesday.

In support of the friends and families of the 17 lives needlessly lost in Florida, many schools and students made the choice to do a 17-minute walk-out in support of changing laws and in the hopes of getting lawmakers to pay attention to youth for support of laws to protect them in schools. About 200 students at Scranton Middle School joined the movement and conducted a walk-out at noon on the football field. Administration was made aware that some students were choosing to participate in the event around 10am and began planning a way to support their advocacy efforts and allow them to assemble peacefully. It was said to be a respectful gathering, and some students held hands while others bowed their heads. Attendance was optional and participation not required.

13-year-old Autumn Smith is an 8th grader who felt it was important to take part. She told WHMI better security is needed to prevent future tragedies, and called the shootings ridiculous.

Her mother, Angela Smith, talked with her daughter after school about the significance of the 17 minutes, moments of silence and the importance of why she was out there, saying her daughter felt it was the right thing to do, not just because her friends were doing it. Smith feels one school shooting is too many and something needs to be done whether tighter security, changes in gun laws or more help for people who might have a mental disability but there definitely needs to be a change. Smith said she’s very proud of her daughter for standing up and taking steps to initiate change. Smith supports the Second Amendment but feels stricter guidelines are needed because as a parent, you can’t be afraid to send your children to school or that you’ll never see them again; just as students shouldn’t be afraid to go to school because it’s supposed to be as safe place.

Officials said while they value educational minutes, they also know that student advocacy and students taking responsibility for their safety in schools is equally important.

Brighton Superintendent Greg Gray tells WHMI they put their safety plan in place and it happened during the time frame of the third lunch, when students typically are outside. He commended administration and staff for how they monitored and handled the event and helped support kids working through the situation, adding they did a nice job with a very tough issue. Gray says he hopes parents are also talking to students at home as well. He says this was a chance for them to voice their opinions to trusted school personnel and officials – adding he’s glad students feel they can trust and rely on them for their safety and security and have somebody to talk to.

Gray feels they were able to manage the situation very well and he feels it turned out to be a positive outcome. He says it was pretty impromptu and a short turnaround but they had already been in the process of planning for similar situations coming up. A national school walkout is planned March 14th to protest gun violence, along with another in which high school students plan to walk out on April 20th - the 19th anniversary of the Columbine shooting.