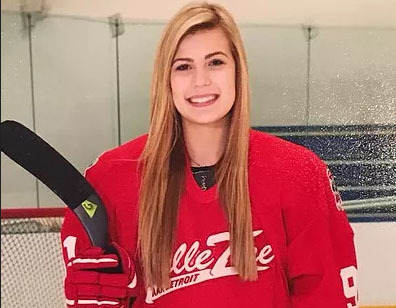 Darian Locklear Kindness Scholarships have been awarded for the last three years to Livingston County high school seniors — regardless of the school they attend — who have been selected for their ongoing commitment to kindness. Last year, $7,000 in scholarships were awarded to five area students. Those who apply are required to send a short essay on how they exhibit kindness in their daily lives. They also need to include two letters of recommendation from a teacher, coach, or another adult mentor.

The tragic accident that cost the lives of Darian and her teammate occurred when the jeep in which they were riding on I-96 near Williamston went out of control and hit a tree. Since the incident, many friends of Darian’s have contacted her family to tell them that her kindness had impacted their lives in a significant way. The parent of one girl even said that she had been suicidal and Darian’s kindness was a major reason why she decided not to take her own life. Other former students have also come forward to tell stories about Darian’s kindness and compassion and how it had impacted their lives.

A group of supporters called “Darian’s Kindness Warriors” organized after Darian’s death has held a number of fundraisers in the last three years, among them 5-K races called “Dash for Darian - a 5-K for Kindness.” They have also given out bracelets that say “Kindness Is Beautiful” on one side and “Fly High, Darian” on the other. The bracelets have been distributed to anyone who was found to have carried out an act of kindness.

Regina Locklear’s former employer, Cooper Standard Automotive, decided on a project to honor Darian’s memory and organized construction of a playground at HAVEN of Oakland County, a shelter in Pontiac for women and children who have been victims of domestic violence. A fundraising account established on the funeral website raised about $40,000 and the company matched the amount. Some 35 family members, friends, and employees built the playground in a single day. The group also organized “Skate for Darian”, a three-on-three hockey tournament, as well as a special scholarship called “The Darian Locklear Memorial Hockey Grant” for girls who want to play hockey at a higher level, but find the cost-prohibitive. In playing hockey since the age of 7, Darian played for several AAA clubs, her teams winning three state championships and even a national championship.