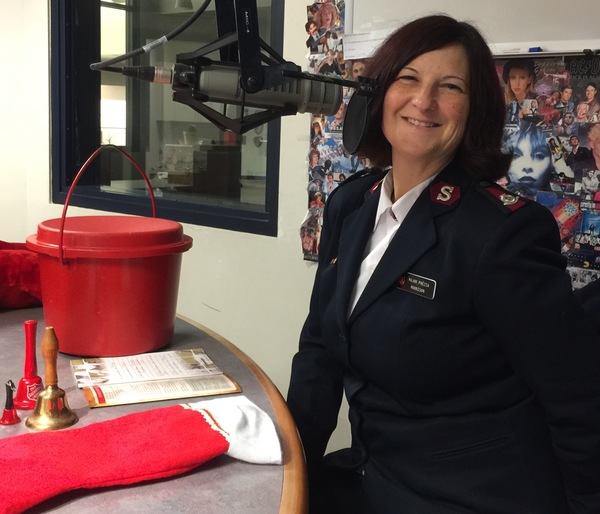 
A farewell open house was held Thursday for the Salvation Army of Livingston County’s Corps officer and pastor.

Major Prezza Morrison will be moving to the Alpena Corps after serving locally for over 5 ½ years. The open house was held at the Corps on Lake Street in Howell and featured fellowship and farewells. Morrison told WHMI she has mixed emotions as she loves the community and hates to leave but knows there’s something more she needs to do and that God has another calling she needs to fulfill and another place that needs a gifting…

Morrison said she has over 32 years of officership and has lived in many counties across the Midwest but none compare to Livingston. She says as new programs were started, new relationships flourished and new committees to serve the greater need were implemented. The incoming officers are Lieutenant Robert and Stephanie Leach, who have three young girls under the age of 5. Morrison says they’re excited to come here, start their ministry and raise their family – adding it will be beneficial to have both a husband and wife coming in to build on her work and continue to move the Salvation Army forward.

Morrison noted the when she arrived the local Corps was struggling financially but she was able get it out of that darkness and also set aside a little cushion. She says that helped because when COVID-19 came along, they were able to tap into that to help people in need. Morrison commented further that anyone who comes here to serve the Army will be great because of the amazing community. Morrison also helped to start new programs and expand others. She thanked the community for all of the support during her time here, saying the community always steps up to fill whatever needs the Salvation Army might have. A community farewell letter from Morrison is attached.

A press release stated the following:
Major Prezza’s major accomplishment has been taking the corps from an over $50,000 deficit to a financially healthy corps, while keeping all the staff and programming. Major Prezza also started a teen youth program that has been actively engaging in the community for over 4 years; Was a major contributor in turning the rarely used food pantry into a client choice, regularly used food pantry; Joined, as an active member, of the Livingston County Emergency Management team; Started the local Salvation Army Emergency Disaster team; She has been a part of the Ministerial Associations in both Brighton and Howell; Was the past vice president and is the current president of the Howell Ministerial Association; Helped grow the local Salvation Army Advisory Board to an active and engaged 16 member group of professionals and much more.

Major Prezza will be missed by her staff, church members and advisory board, however they all wish her well and know that the new appointment will be blessed to have such an amazing leader.

“I am disappointed to leave Livingston County. I have learned to love and respect the people in this community. This county is filled with people who care for those in need.” Says Major Prezza “They are willing to sacrifice whatever is needed, to help people become self-sufficient. Whenever a plea was made by the Army for a specific need, the plea was heard and fulfilled. The collaboration between all agencies made our service easier. Our volunteers were caring and priceless. I will remember my time here as a jewel in my life. You have all effected my life in a positive way. I will use what I learn here to make a better community everywhere I go. Thank you for your support and God bless you all.”