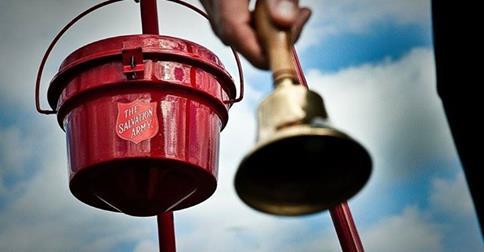 The holiday shopping rush has arrived in typical fashion but today also signifies the start of an annual campaign to help those most in need.

When people think of Christmas, many think of the Salvation Army of Livingston County’s familiar red kettles and bells ringing. Today marks the start of the Christmas fundraising season for the local Corps, which provides one-third of its annual budget and supports a variety of programs and services year round. The next few weeks are said to make the difference in the number of people the local Corps can help and the programs it can do the following year. The campaign always runs through Christmas Eve. Major Prezza Morrison says even though they have fewer days to ring bells, they still believe the community will come alongside them. She says two years ago they had 37 days to ring bells but because of some national agreements last year, they couldn’t start until after Thanksgiving - which gave them only 27 days to ring. She says this year because Thanksgiving was later than usual; they only have 22 days for bell-ringing. Due to those reasons, Morrison says the campaign goal is the same as the past two years and stands at $385,000. She says although the days were cut back, they didn’t feel it was fair to increase the goal even though the need is still there and many people are struggling but they also believe in the community.

Morrison says when people donate or volunteer, they bring hope to a perhaps a family in need, a neighbor, friend, co-worker or even a stranger. She thanked the community for all of its support throughout the year, telling WHMI there is no way could serve the people they do without their help, volunteerism, monetary donations or whatever it may be. Morrison says bell-ringing has become tradition for many families, which demonstrates the importance of giving back to the community. She says this time of year is supposed to be about hope and joy, but that’s not always the case for those who are struggling – adding the work the Salvation Army does year-round for people throughout Livingston County is only possible through the generosity of the community. Morrison highlighted the Summer Lunch Bunch, which served over 4,000 meals to children who were out of school during the summer months and also distributed almost 20,000 pounds of food to them. The local Corps provides rent and utility assistance, along with sheltering and over 1,500 nights were provided this past year. Morrison says their goal is to have quality programs and serve as many people as they can but also bring them to a point where they are self-sufficient. She says they’re now looking at third and fourth generations of poverty and they want it to stop, referring to their Pathways of Hope program. Morrison says they’re doing more extreme case work and sitting down with families - helping them set goals and work with them to achieve those goals and move them in a better direction. She stressed it’s not just putting a Band-Aid on a situation but giving someone a hand up to help move them forward. When they’re able to do that, Morrison says people not only have hope in themselves but hope in mankind and they recognize the support from the community.

One noticeable addition to this year’s Christmas campaign is a wooden Christmas tree with some clear lights at the Salvation Army’s storage area at 3600 East Grand River. Morrison says as donations come in, they’ll change the clear lights to red for a thermometer effect. That way people driving by can see progress and when they reach their goal, she says they’ll turn on the star at the top of the tree for the community to see.

Families, groups, and individuals are encouraged to ring a bell at various locations throughout the county. Morrison says while they prefer volunteers, they recognize there are people struggling and the Salvation Army will hire bell ringers in some cases. Although the bell-ringing campaign ends Christmas Eve, monetary donations are accepted through January and are tax-deductible. Morrison says they have some new locations this year for bell-ringing but there are also other opportunities to volunteer. Information can be found through the provided link. (JM)