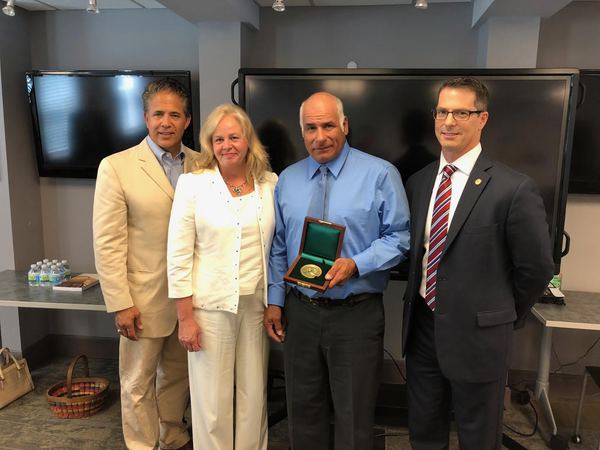 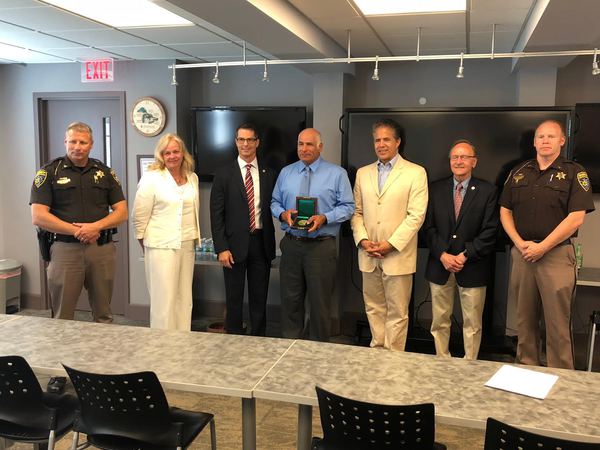 A special ceremony at the Brighton Area Chamber of Commerce honored a local hero who risked his life to save another’s. For the 114 years, the Carnegie Medal of Honor has been awarded to individuals who put themselves in extreme danger to save, or attempt to save, the lives of others. 54-year-old Michael Rodriguez of Howell said he was very humbled and honored to receive the award when it was presented to him earlier today.

Last July, Rodriguez witnessed 45-year-old Matthew Harris of Howell, who suffers from a medical condition, lose control of his vehicle and drive off the highway into a 9-foot-deep retention pond. Rodriguez, who is a self-proclaimed poor swimmer with a bad shoulder, jumped into the water and dog-paddled to Harris’s car. Using a pocket knife, he cut Harris free from his seatbelt as the vehicle was sinking, and swam him to safety. Carnegie Hero Fund Commission President Eric Zahren was present to read the account of Rodriguez’s heroism. He called that the third pillar of what the foundation does, with the first two being to recognize civilian heroes, and then support them. He said that, for the commission, it is equally important to tell the stories of the heroes for a number of different reasons. Zahren said they give people a sense of hope in our society that there are still people out there who care enough about another individual to risk their own life. He continued, saying that they remind us that when we are at our best, we are capable of great things, and that there is hope for our society.


Also present at the ceremony were 8th District Congressman Mike Bishop, State Representative Hank Vaupel of Handy Township, and members of the Livingston County Sheriff’s Office. Vaupel complimented Rodriguez, saying that it’s not every day you get to meet a real hero. Representative Bishop spent time with the humble recipient, sharing a story about a time a hero helped him in his life, and the effect it had on him. He spoke of the ripple effect Rodriguez’s action would have, not just for Harris and his life, but for Harris’s family in not losing him to tragedy.

In addition to receiving this medal, Rodriguez was also honored at a gala event in Pittsburgh earlier this month with other award winners from around the United States and Canada. The Carnegie Hero Medal Commission reviews 850 to 1,000 cases each year, but only selects around 10% of those for award. Rodriguez has become the 9,999th to receive the medal since it was first given out in 1904. (MK)