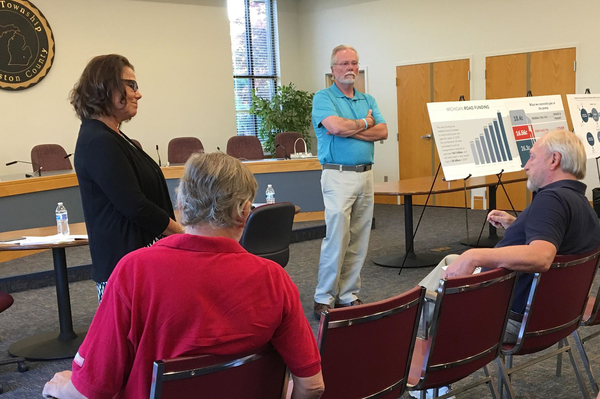 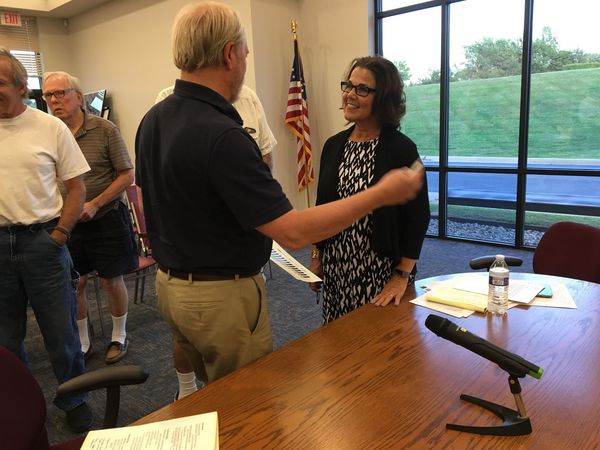 Community members had a chance to share their thoughts on the House Republicans’ road funding plan at a town hall meeting hosted by State Representative Ann Bollin.

The Brighton Township Republican hosted the event at Genoa Township Hall Wednesday to receive input from constituents and to discuss proposed amendments to the House’s transportation budget plan. The town hall featured House Transportation Committee Chair Jack O’Malley of Lake Ann, who first gave an overview of some of the proposals, which he feels will help spend money that’s appropriated for roads more wisely. Among the proposals are calls for MDOT to take over funding bridge repairs and utilizing asset mapping to rank road quality.

O’Malley says that some of the proposed amendments would provide more opportunities for local governmental entities to raise money to fund repairs for roads within their region. He says those options could include raising the gas tax or registration fee for that jurisdiction only, which would be established through a vote of the people. Still, both Bollin and O’Malley agreed that a gas tax funding model does have a life expectancy as its effectiveness could vary as the auto industry continues to advance. Bollin tells WHMI it’s about making options available to local communities and road commissions that might help leverage more resources for them.

O’Malley also addressed some misconceptions he says he’s heard about the proposed amendments, including suggestions that one proposal would increase the gas tax by 15 cents. O’Malley says the proposal actually calls for shifting the state’s sales tax to the gas tax, meaning there wouldn’t be an increase, just a reorganization of the revenue generated at the pump. Dan Wholihan attended the town hall event and felt it was informative, but still has reservations adding, "It's good to see the different ideas floated but I want to see what the final things are. I've seen things that scare me...because I don't support any gas tax increase period, we already have one. And I see that being floated in...the alleged Senate plan."

Approximately 50 people attended the town hall and the most frequently discussed issue was the possibility of using tollbooths as a way to generate revenue for Michigan roads and bridges. In June, Bollin proposed an amendment to the House’s transportation budget plan that would require the Michigan Department of Transportation (MDOT) to explore the feasibility of implementing tolls on Michigan roads. Only one resident at the town hall publicly stated that they were in favor of tolls, while several others noted they were vehemently against them. Bollin reminded them that her proposal only calls for exploring the idea, not cementing it.

Bollin says, "...we're requesting MDOT to do a deep dive into tollbooths. It's not that I'm in favor or against them, I just think that we have an obligation to put everything on the table, vet all ideas to make sure we have a long-term solution to fund our roads and bridges."

While tollbooths created the most vocal opposition, Brighton Township resident Mike Palmer expressed frustration at the plan in its entirety. Speaking to O'Malley and Bollin he said, "What we need is people that's going to go in there and get the job done...you guys got to get it together and you got to come up with some very good ideas and what I've seen here, it's just the same old stuff. You're just doing it over and over again with a smoke screen."

Bollin says the town hall was not the end of the conversation and urged residents to continue to share their thoughts with her on roads, bridges, and other issues. (DK)