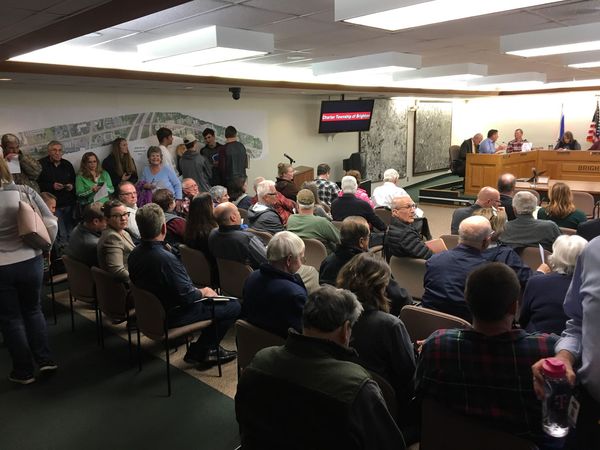 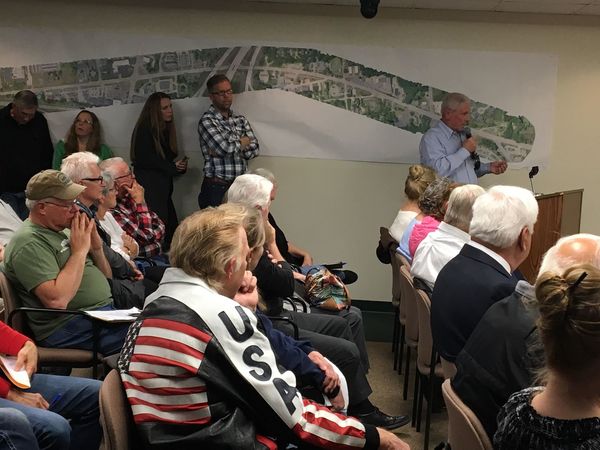 Area residents packed Brighton Township Hall Monday night to voice their concerns and opposition to a gravel pit owner’s request to rezone a portion of his property.

Ashley Land Development is proposing to rezone 32 acres of the 125-acre gravel pit off of Stobart Road from Natural Resources to I-1 Industrial district. The company sought the new designation so they may be permitted to crush concrete onsite as a way to utilize the property that supposedly can no longer be used for residential development as envisioned, due to a contaminated groundwater supply in the vicinity. The township’s Planning Commission on Monday held a public hearing regarding the request, which was heavily attended by residents; the majority of who stated their opposition to the rezoning.

Some of the issues voiced by attendees included the potential for increased traffic, decreased property values, and health concerns, namely exposure to silica dust, which can be created by crushing concrete. Milford resident Susan Long feels those issues are significant stating, “But my most impassioned plea will be as a mother of five young kids. They have a right to play outside in clean air. Air-particulate matter is a true concern. We need to speak up for the vulnerable among us; the children, the elderly and the immune compromised."

But Craig Dockery, the only resident to speak supportively of the proposed rezoning, suggested that the mentioned health concerns weren’t as significant as they were being made out to be. Before commissioners and the crowded room Dockery said, “…to come out like the silica is bad for you, it is if you’re breathing it right away, but if you’re going down your limestone road, that’s silica too…everybody’s crying about nothing really."

A couple of residents at the meeting inquired about a lawsuit that had been filed by the township against Ashley Land, after it was discovered that the company had brought concrete onsite, despite the lack of provisions permitting the activity within the district. Roy Hunsinger, an attorney from Milford Township, spoke to the issue while opposing the request, noting that Ashley Land’s attorney Paul Burns is also the attorney for the City of Brighton and the Livingston County Road Commission. He feels the representation is a conflict of interest.

In addition to the lawsuit, the township as a result revoked two of the company’s permits last July. Planning Commission Secretary Jeff Stinedurf asked Ashley Land representatives about allegations that the company had been deceptive in log book recordings to hide the concrete that was coming onsite, which was reported by WHMI when the permits were revoked. Stinedurf asked for assurance that the company would properly log the concrete if their request was granted. Ashley Land Planner Paul LeBlanc denied the allegations, saying that the company had logged the material. He cited turnovers for the township's engineer and at the weigh-station as contributing factors for the problematic logs. Township Planner Kelly Mathews however confirmed that the township wasn’t provided the detailed logs until after they had filed the lawsuit.

The Planning Commission ultimately voted unanimously to recommend the Board of Trustees deny the request, citing it’s incompatibility with the township’s land use plans as one of the reasons. The board will consider the recommendation and request at a future meeting. (DK)