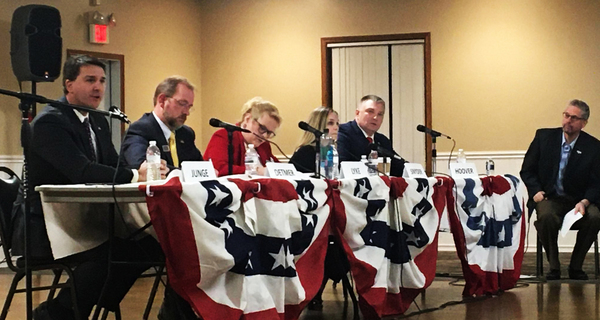 
Republican primary candidates for the 8th Congressional District drew a supportive crowd at a forum hosted by the Ingham County Republican Party.

Early on, candidates were asked about Michigan’s strength and opportunities. Nikki Snyder noted that education is one of them. Michael Strouv of Birmingham says he’ll be voting for Snyder because he feels she is a strong advocate for local control and education. Strouv says, “Snyder is the fighter we need. As a young single mom with a healthcare background and pro-life message that carries strong, she can absolutely deliver the message that the people, especially the women and moms in this district, feel.”

Border security was a hot topic at the forum and one that is paramount to Hartland resident Larry Parsons. Parsons’ daughter Meghan passed away about a year ago from a fentanyl overdose, and he says it has devastated the family. Parsons states that 90% of fentanyl comes across the southern border, and that Mike Detmer’s stance on border security is a major reason why he’ll be voting for him. He adds that Detmer’s strong stance on Second Amendment rights contributed to his decision.

Candidates were also asked what they believe the most important part of the Republican platform is. Sandra Helzerman of Fowlerville says she’ll be voting for Kristina Lyke because she believes Lyke is strong in her stance on major platform issues, noting that Lyke is pro-life and supports the Second Amendment. She believes Lyke will take a stand and won’t back down. Helzerman also says because Lyke grew up in the area and currently lives here adding, “I know where she’s coming from…and I support her views all the way”.

Candidates were questioned about their strategy to defeat Slotkin. Ash Hampton says he joined Alan Hoover’s campaign and will be voting for him because he feels Hoover has a strong plan. Hampton, speaking of the other candidates says, “They can’t beat Elissa Slotkin and Alan Hoover can. He can’t sit there and get dismantled the way Mike Bishop did with Elissa Slotkin and her deep state CIA antics. Alan was actually trained in the opposite of what the CIA does so he’s able to see deception and move forward in a new game plan.”

Candidates were also asked if elected, how they would work with Michigan’s congressional delegation for the greater good, and what their experience is in bringing divided groups together. Marcia Dicks of Tyrone Township says experience is why she’s voting for Paul Junge adding, “What stands out for me with Paul is his life experience, his degrees that he has, he worked in Washington under the Trump Administration, he worked in TV…I think all that rounded out could better beat Slotkin.”

Several residents at the forum told WHMI that they like all of the candidates and feel they each have redeeming qualities.