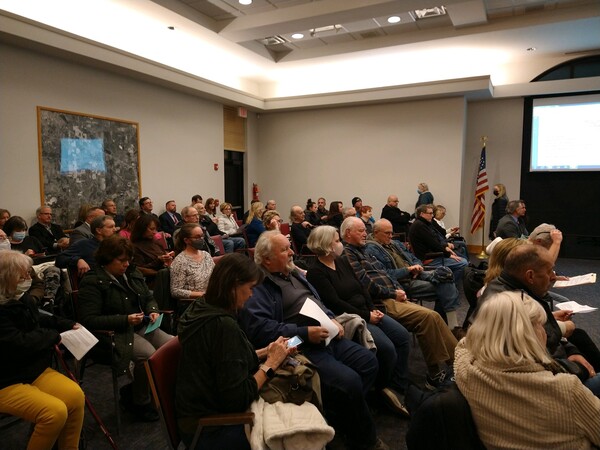 A sheriff’s deputy was in attendance as there were some safety concerns from staff and others following the last board meeting that had to be adjourned.

Capital Asphalt is seeking to construct a plant on property at the Toddiem Drive and Victory Drive intersection. The application for the rezoning request from Industrial to Planned Industrial District was filed by Net Lease Associates, LLC. Both the township and county planning commissions earlier recommended approval.

The rezoning request was before the township board in early December but that meeting had to be postponed because of the capacity crowd.

Concerned residents have since started a petition drive to oppose the plant at www.change.org , which had more than 1,200 signatures as of Wednesday evening. A link is provided.

Many crowded the Commission meeting Monday night to again protest the plant and speak their piece, although the item was not on the agenda and derailed the meeting for about an hour. There was a lot of grandstanding and applause and the stated two-minute time limit during Call to the Public was not enforced.

Resident John Palmer mentioned the word “mistrust” and said he wasn’t trying to be confrontational or insulting but had questions and felt the wording on agendas was not clear. Palmer said questioned how the plant would be good for the community, the master plan, or their way of life - adding he never saw the word asphalt plant on anything and wanted to make sure nothing happens to allow it to move forward without the Commission feeling their concern and frustration.

Chairperson Chris Grajek responded to the accusations and stressed that everything is very transparent and posted publicly. He said they should not be accused of “doing anything other than being transparent”, stating the Commission has had open meetings just like it does for any other business items and people are more than welcome to come speak and ask questions.

Commissioner Jim Mortenson, who also serves on the township board, stated they’re well aware of the attitude of many of the public toward the plant and have been inundated with emails.

It was noted during the meeting that the site has always been zoned industrial and the property owner has a right to change zoning to affect a sale.

Grajek said the owner has someone looking to buy the property and is exploring whether they’ll be able to use it for what they want. He added this is not a “slam dunk” and there are a lot more steps in the process as well as open, public hearings.

Staff is working to put together a document to explain the process and said there’s been a lot of confusion and misinformation circulating. Staff is also working on identifying an alternative site for the board to hold a meeting on the rezoning to accommodate the anticipated large crowd.

Updates and information will be posted on the township website, www.Genoa.org.