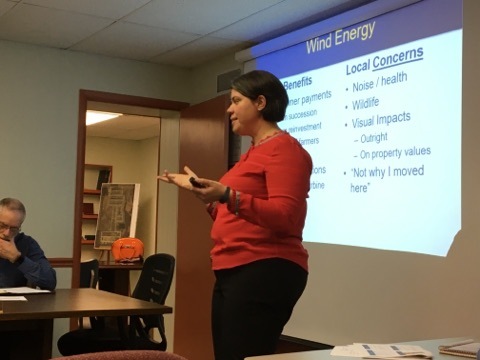 There’s space and potential for renewable energy developments in Handy Township, according to a researcher from the University of Michigan.

Mills says communities need to begin planning early to determine if renewable energy developments may or may not fit into the region and its future plans. Dr. Mills also says a municipality’s regulations on renewable energy send a message to prospective developers. She says rural communities need to get ahead of the renewable energy initiative by being prepared with regulations before potential developers come knocking. Handy Township does have an ordinance that speaks to solar commercial activity, but not guidelines for commercial wind developments.

Mills says there is decent potential for utility-scale solar development in the region except for the Village, noting that benefits could include enhanced water quality, landowner and tax payments. There are also concerns though, like the potential impact on the farming community’s economy and local wildlife. As for wind energy, Mills says there’s potential for such developments in the area south of I-96, west of Fowlerville Road. With wind developments, the primary benefit is said to be economic. Some concerns are the noise made by wind turbines, visual appearance, and potential health impacts.

Members of Handy Township’s Planning Commission say they would like to begin crafting an ordinance that addresses commercial wind energy developments in the coming months. (DK)