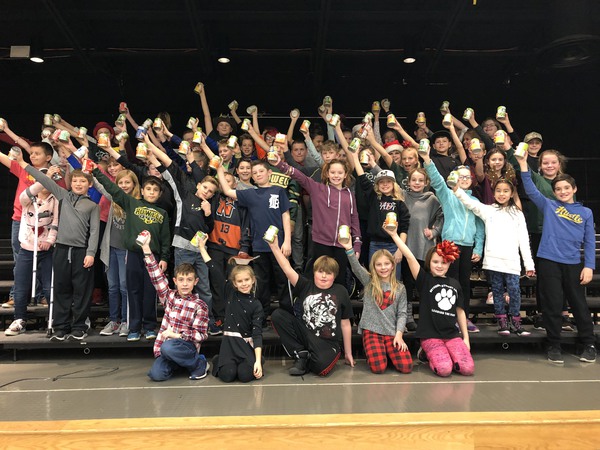 A district-wide food drive led by Howell Public Schools will likely meet its goal and may even surpass it, as one elementary school is far exceeding the number of items they’ve collected in the past.

Friday was the last day of the district’s food drive, which aimed to collect 30,000 cans to support Gleaner’s Food Bank. Meeting this year’s goal is a very real possibility, as Hutchings Elementary School alone had collected over 10,000 food items going into the last day of the drive.

Jason DeLand, 5th grade teacher and Student Council Advisor at Hutchings Elementary School, contacted WHMI to share the generous spirit that is alive and well among the school’s students. He says the school usually does a great job, bringing in an average of 4,000 items in the past, but says this year they’ve gone above and beyond anything they’ve done before.

As of Friday morning, DeLand believed the school would have collected nearly 12,000 items by the end of the day, making their contribution nearly half of the district’s set goal.
Later in the day, he reported the school total ended up being 15,276 - of which the 5th grade donated 7,408. DeLand says he’s heard stories of kids going door-to-door seeking donations and parents putting out collection boxes at work, adding that the school’s community “really got into the spirit of helping others out this season.”

Though the food drive is now over, the district’s impact on the community is just beginning, as over 14,000 residents of Livingston County face food insecurities. Last year, the food drive gathered 22,000 cans, which equated to nearly 9-and-a-half tons of food. That was enough for over 15,000 meals for families in the county. (DK)