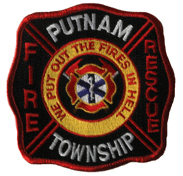 
Some members of the Putnam Township Fire Department will be undergoing their annual physicals – an effort the chief says is to keep staff healthy and catch any potential issues early on.

The Board of Trustees met recently and approved a motion to spend up to $3,500 for annual physicals for the Fire Department. Chief Curt Ruf said they started last year with all of the department undergoing physicals. He says it worked out well and a company comes out to the department for the day. While they did the whole department last year, Ruf said this year it will only be those age 40 and above so the expense is a little less.

Ruf told the board it’s a comprehensive physical with a comprehensive blood draw. He stated that unfortunately, there have been a lot of first responders that were diagnosed with cancer this year, including one longtime paramedic who started within Brighton Township and these physicals are the type of thing that catches that early on and helps keep staff healthy.

Ruf said they had a few minor instances last year in which four staff members needed to get some kind of follow-up – adding it was nothing to take them off duty or put them on light duty. He said there were a couple though who didn’t really know about something and they caught it and it helped, so this is just an effort to keep the staff healthy.

Nine members of the department are scheduled to receive the physicals on December 3rd. Ruf noted the expense was budgeted for and was part of the capital improvement plan that was presented and approved in May by the board.