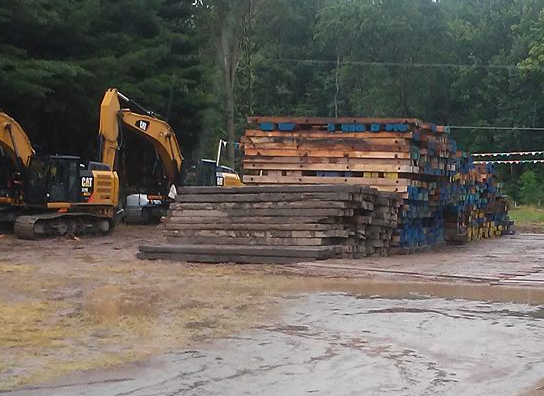 A Putnam Township man is threatening to take the township to court over materials left behind from the Rover pipeline. During the public comment period of Wednesday night’s meeting of the Board of Trustees, Putnam Township resident Earl Smith took issue with officials over a ticket he was a recently issued. The Board added it to their agenda.

Smith was cited by the township for a large amount of crane mats that were left over from the Rover Pipeline project and transferred to his property when the pipeline finished in early July. The crane mats are long logs ranging up to 40 feet long that Rover laid down to use for driving construction vehicles over swampy areas during the project. Smith said the ones he had are 18 feet. Treasurer Pat Carney responded that he had them stacked 2 deep, taking up about 36 feet, then. Trustee Norm Klein said that when he drove by, the pure volume of what he saw was like nothing he had seen before, comparing it to a mountain.

Putnam Supervisor Dennis Brennan said there were thousands of these used during the build, and that Rover was supposed to remove everything they brought when they left. Apparently many went to the Fyke gravel pit in Putnam, whom Smith works for, before he arranged for them to be brought to his property. Brennan explained part of the problem the Township has is with the sheer volume of timber. He said they are looking at 30+ semi loads that couldn’t possibly be used by the homeowner in a reasonable amount of time. Therefore, the only explanation he sees is that it will be stored for many years to come, or that Smith is planning on selling them. Brennan said both are unacceptable uses in Smith’s residential zone. Smith disputes his property is zoned residential, saying that it is agriculture. He said he planned on cutting the wood and using it to heat woodburning stoves he would install in his house and accessory buildings. He believes this will save him thousands of dollars on heat over the years.

The Michigan Department of Environmental Quality has investigated the crane mats and said they weren’t contaminated. Brennan said, however, that the MDEQ didn’t want them sitting around stacked for long periods of time, and that they would take their own action, if needed, within 1-2 months.

Smith had until September 5th to pay the $100 citation, but told officials he would dispute it in court. During a special meeting on September 4th, the Board of Trustees discussed the matter, unbeknownst to Smith who was unaware of the meeting. Clerk Sally Guyon said they were required to give 18 hours notice to the special meeting that was held on a Tuesday. Brennan said it was posted the Thursday before, 5 days in advance. The township contacted Rover, asking them to remove the materials, which they have begun to do.

Smith feels that he should have been allowed a court date and for a judge to decide on whether he could have the wood or not, before it was removed. He added that he felt discriminated against for the amount of wood on his property. When Putnam Trustees began discussing the option of waiving the ticket once the wood was removed, Smith declared he didn’t want them to, and that would rather continue in court. He said the cost of the subcontractor removing the wood will likely cost him thousands of dollars. The Board took no further action. (MK)