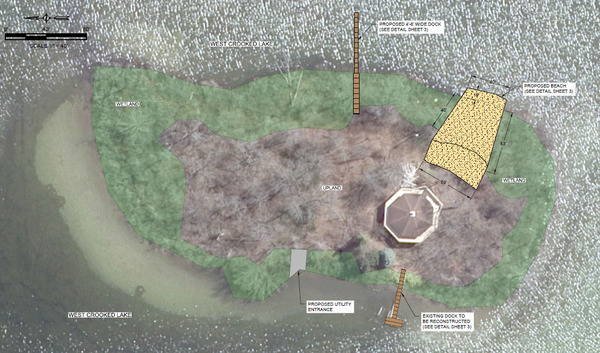 Residents got to speak their mind on proposed work to be done on an island in West Crooked Lake.

The Michigan Department of Environmental Quality held a public hearing for a permit application that would allow a new boardwalk, dock, and beach area on Perri Island in West Crooked Lake. Over the past couple years, owner Joe Perri has been renting out the island property as a vacation home. Roughly 110 residents from around the lake attended the standing-room-only hearing held at the Genoa Township Hall, Wednesday night.

MDEQ Water Resources Division member Jeff Pierce led the meeting, informing residents that that they were judging the environmental impact of the project, solely. Because of rigid guidelines for the permit, residents were also informed that public opinion doesn’t really sway them one way or another. Several residents had issues with Perri’s renters and a perceived lack of boating etiquette and knowledge. Pierce informed the group that this was out of their jurisdiction and off-topic for the MDEQs considerations. Still, many wanted their complaints heard, unhappy with the “commercialization” of the island.

Craig Leslie of Brighton, however, presented an argument suggesting Perri’s project fails to meet the 3 conditions of the MDEQ tests for issuance of permit in a wetlands area. With “avoidance,” he felt firstly that the impact of the wetlands could be avoided by using the current dock.With “minimization, he believes the existing single dock allows access to an ample usage of the property. And finally with mitigation, he said he has seen on evidence of it regardless of the size of the wetlands affected. Leslie and a couple others argued that the increased activity from the rental has also affected fish spawning.

In all, 12 spoke against the project, while 10 showed support. Many showing support believed that Perri has the right to do with his property as likes, like everyone else on the lake. They felt he was within his rights as a resident, with some testifying to the poor condition of his current dock and beach area, which one resident described as “muck.” Perri was at the hearing, along with representation from his engineering group.

The public comment period is open until October 6th, after which the MDEQ will make their decision. (MK)