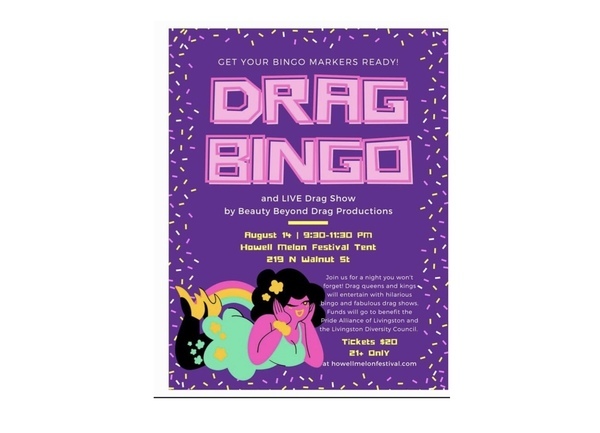 
The controversy surrounding a Drag Queen Bingo event scheduled next month as part of the Howell Melon Festival was again the focus of a public meeting on Wednesday night.

The Howell Area Parks and Recreation Authority had scheduled a special session to approve the required liquor license for the festival, which it is putting on in conjunction with the City of Howell. At issue is a fundraiser for Pride Alliance of Livingston and the Livingston Diversity Council that was approved by the recreation authority that was initially set to take place on the evening of August 14th in the festival beer tent.

However, the sold-out, adults-only event was made into a point of conflict after Meghan Reckling, the Chair of the Livingston County Republican Party, posted to social media her opinion that the event didn’t fit with the family-friendly nature of the festival and was not something that should be “sexualized.” The resulting furor prompted the City of Howell to clarify that it had not been made aware of the event when it approved the recreation authority’s application.

At Monday’s city council meeting, officials said one issue they had was the fact that the event was advertised as running from 9:30 to 11:30pm, despite an agreement that all Melon Festival events had to conclude by 10pm. However, Howell Mayor Nick Proctor went on to accuse the authority’s staff of deceit, all the while maintaining that the city wasn’t opposed to the event itself, but merely the process involved in creating it.

By the time of Wednesday’s HAPRA meeting, what should have been a routine license approval instead became a platform for those both for and against the event to air their grievances. One of those who wanted the authority to withdraw the event was Yvonne Black of Howell, who said she resented the implication that opposition to it was synonymous with being prejudiced. "These verbal assault that 'You're a bigot, you're a homophobe, you're a hater' because you want to keep traditional values in your community. I think it's just appalling that people would think 'You're a bigot if you don't agree with me or if you don't like it, don't come.' Oh really? I've been coming to the Melon Festival for thirty-plus years and now I'm being told if I don't like raunchy, adult entertainment then I'm just not supposed to go."

Despite that, many of those who spoke against the event were explicit in their opposition to the LGBTQ+ lifestyle, referring to it as sinful and equating drag queens with being pedophiles. In response, Stacey Farrell of Oceola Township said it only took seconds on the internet for her to find dozens of pedophiles already living in the area and that it was a “terrible stereotype” to automatically place on men in drag. “Imagine if they were here right now. Would you actually say that to their face?” A woman in the audience immediately yelled out, “How do you know they’re not?” to which Farrell responded, "How do you know they are?” At that point, HAPRA Board Chair Sean Dunleavy reminded the audience to please be respectful and not interrupt those speaking. Farrell then concluded by saying it was “discriminatory and stereotypical and that is exactly what people expect out of Howell.”

Dave Lacey of Howell agreed that it was unfair to assume those opposed to the event being held during Melon Festival had hate in their hearts, as opposed to holding a sincere belief that the “raunchy” content it advertised was out of place in the community. "It's controversial and should be excluded because it's controversial. It's dividing the community instead of uniting it."

Ashley Keinath of Howell Township, however, said it was hypocritical to say the adults-only event was in any way less in line with community standards than previous gatherings at the festival beer tent. "There were shirts sold in the past with women holding melons over their boobs, but there's no outrage about that. So now all of the sudden there's this immediate outrage. Again, it's an adults-only event in a tent where beer's being sold, which was being sold before the event even started, and there's an overwhelming amount of support, especially from friends of mine... my own mom purchased a ticket. I was raised here in Howell and I want to see change that this isn't the mindset of the community."

Kasey Helton of Marion Township, who delivered a petition with more than 200 signatures of residents who supported the event, said the dark depiction of what the fundraiser will be is completely at odds with her experience. "I've been to Drag Queen Bingo before. I'm a ticket holder. I jumped right on it. I love it. My most favorite memory of my late mother was with a drag queen in Key West where we belted out 'Hello Dolly' at a club. She was a church-going woman, ok? She was not a heathen, but she had a new experience and it was a memory we made together. Things can change and they should change in this society...in this county."

After about 45 minutes of public comment, the authority adjourned the meeting, having voted to approve the liquor license at the outset.

Despite the controversy, the event will go on as scheduled on the 14th, the event has been officially moved to the Historic Howell Theater to accommodate both the expected overflow of interested residents and the later hours.

A press release from HAPRA Director Tim Church is attached.

Jon King is a member of the Livingston Diversity Council Board of Directors.