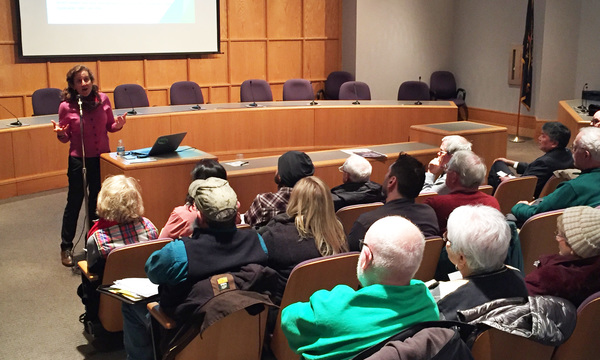 PFAS chemicals in the Huron River, as well as steps being taken toward addressing the contamination, was the topic of a public health seminar held in South Lyon.

Per- and polyfluroalkyl substances, known as PFAS and PFOS, are a class of man-made chemicals that are said to be nearly indestructible. Because an effective method for destroying the chemicals has yet to be discovered, efforts are being made to remove them from the affected bodies of water. Wednesday’s presentation, held at South Lyon City Hall, was led by Laura Rubin, the Executive Director of the Huron River Watershed Council.

Rubin spoke about Tribar Manufacturing, which is a Howell-based company whose Wixom location was previously identified as a major source of PFAS that were being discharged into Norton Creek. She says they’ve seen improvements since Tribar in October implemented treatment technology that’s proven to be effective in removing PFAS, adding that officials have seen the contamination levels decrease in Norton Creek. She says they hope to see a downward trend in the Huron River, noting that the Council is working with the state to potentially identify other contributing sources they may not know about.

Rubin says the Michigan Department of Environmental Quality and Livingston County have also increased residential well testing in areas near sources of contamination. Though a number of residents have inquired about testing their own wells themselves, Rubin says it’s not necessarily encouraged as the samples can be extremely easy to contaminate and the cost of doing so is pretty expensive. Rubin reiterates that drinking contaminated water or eating fish from contaminated bodies of water is the major threat, not skin contact, adding that residents can and should still participate in recreational activities on the river.

However the “Do Not Eat Fish Advisory” for the Huron River that was issued by the Michigan Department of Health and Human Services in early August remains in effect and likely will for quite a while. Rubin expects it might be a couple of years or even a decade before the advisory is lifted. Rubin says the goal of the public information sessions is to be transparent about what officials know and to help the community understand what kind of chemicals PFAS are, as well as the threats they present.

More information about the state's response to the contamination can be found at the link below. (DK)