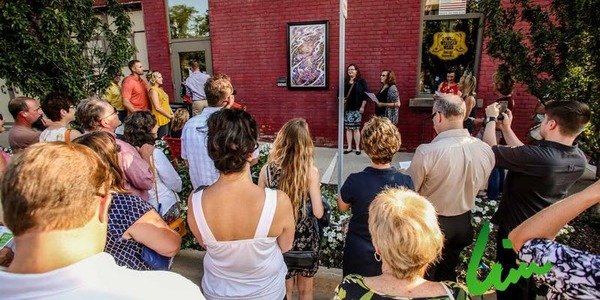 A public arts event last summer has been recognized at a statewide award ceremony.

Howell Main Street’s annual Howell Art Project, which was expanded to a week-long celebration of the Arts in May, followed by a visual demonstration called LuminoCity in September, was recently named the Best Promotions and Marketing Project/Program: Small Community Under 10,000 Population by the Michigan Downtown Association. The award was presented during the association’s annual statewide conference last week in Holland Michigan.

Kate Litwin, Howell Main Street COO, received the award on behalf of Howell Main Street. “I was blown away when I learned that we had received this award,” said Litwin. “I had submitted the project for consideration, and we faced some very stiff competition from other communities. This year, we worked hard to freshen the Art Project, and this award makes it clear that the changes were well received.”

The Art Project introduced several new components this year, including the creation of several murals throughout the Main Street district. It also introduced crosswalk art and sidewalk chalk art, which was designed to engage the community. The competition culminated in an evening Art Walk (pictured) and celebration at the Howell Opera House. Finally, LuminoCity, a joint project of Monroe Community College and Howell Main Street, and facilitated by Premier Event Technology, projected an historical view of Howell onto the Howell Courthouse Building.

Founded in 1980, the MDA is a state-wide, non-profit organization and a driving force in the interest and growth of downtowns and communities throughout Michigan. The MDA encourages the development, redevelopment and continuing improvement of Michigan communities and downtowns.

Howell Main Street DDA is a volunteer-driven organization that promotes downtown Howell as the heart and hub of the community. For more information about the HMS activities, including Art Project, or to volunteer, visit http://www.downtownhowell.org