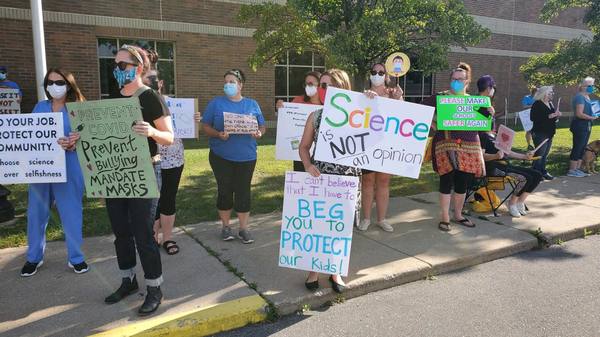 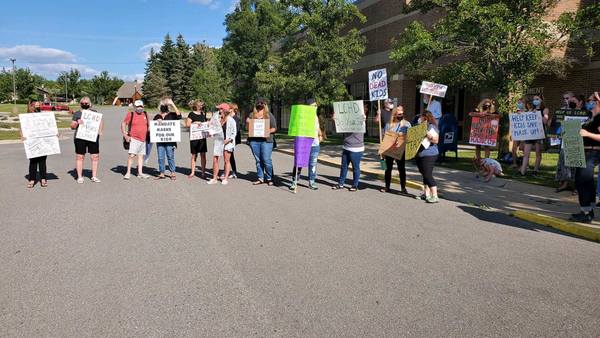 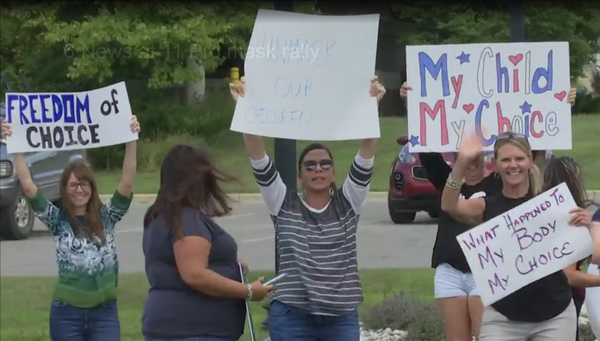 
**This story has been updated to reflect that both Ingham and Washtenaw counties have issued school mask mandates.


About 50 residents turned out in front of the Livingston County Health Department on Wednesday to protest the lack of a mask mandate for local schools.

The protestors, carrying signs that said “Science in not an opinion” and “Do your job. Protect our community”, turned up at 4:45pm and held a peaceful demonstration in front of the agency they say has the power to protect their kids from the current surge of COVID-19, but has declined to do so.

Meg Koenemann, a parent of a Livingston County student, told our media partner WLNS that they want the health department to step up and do what is best for kids. “We’ve been contacting the Michigan Department of Health & Human Services. We’ve been contacting and asking our local schools and our superintendent and our school boards and everyone is just passing it around and saying it’s somebody else’s responsibility.”

So far, no Livingston County school district has issued a mask mandate, despite the recommendation from state and local health officials that they do so. However, those same officials have declined to issue a mandate, leaving the decision up to local health departments and school boards, which have been inundated with vocal opposition from parents opposed to the idea.

Among them was Mark Merna, one of about a dozen counter-protestors who also showed up at the health department, with signs that said "My Child, My Choice" and "Unmask our children". Merna said for him it is an issue of the right for parents to decide what is best for their kids. “If one side is voicing their opinions, the other side should be heard as well. It’s not just a mask mandate – it’s a mandate against personal freedom and that’s the principle that I’m here for.”

But for Brighton parent Caitlyn Perry-Dial, the parent of two young kids unable to be vaccinated, the issue of personal freedom is impinging on her children’s ability to stay safe. “They can’t be vaccinated, and that’s the biggest concern right now, we don’t know when they’ll be able to get the vaccine so the mask is literally their last line of defense.”

Meanwhile, Ingham County has ordered that masks be worn inside all schools and other educational settings, becoming the 16th county to mandate face coverings amid Michigan’s fourth surge of COVID-19 cases. Many K-12 districts in the Lansing area had already required masks at the start of the academic year. But health officer Linda Vail says it's crucial to cover gaps at daycare centers, child care centers, preschools, youth programs, and private schools.

As expected, Washtenaw County — home to Ann Arbor — issued a similar order. Counties with mandates include many with the largest populations but also some rural ones. That means that the four counties which surround Livingston County - Ingham, Oakland, Washtenaw, and Genesee - have issued some form of mask mandate for schools.

While both Livingston and Washtenaw counties utilize the services of Dr. Juan Marquez as their Medical Director, Livingston County has no mask mandate, while Washtenaw County does.