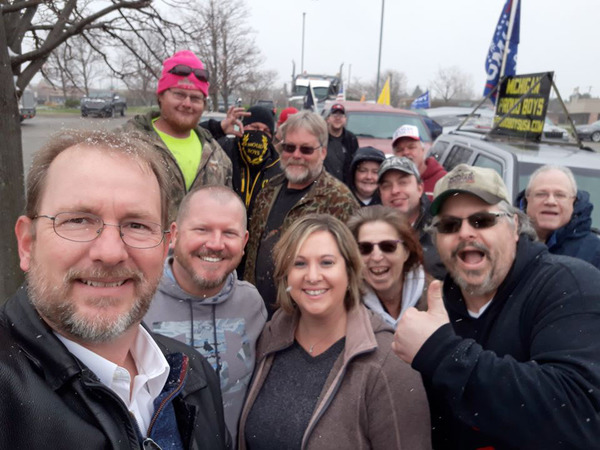 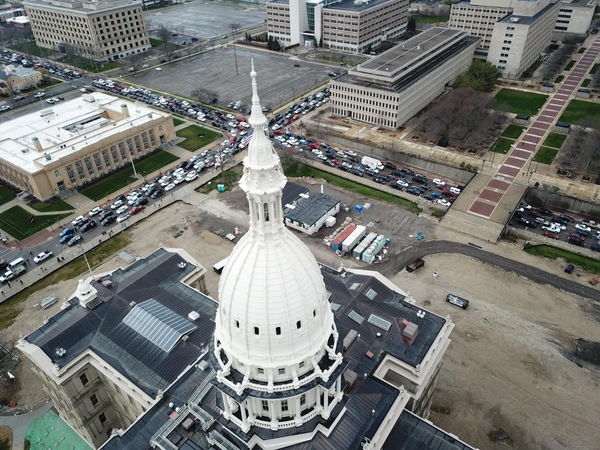 
Flag-waving, honking protesters drove past the Michigan Capitol on Wednesday to show their displeasure with Gov. Gretchen Whitmer’s orders to keep people at home and businesses locked during the coronavirus outbreak.

The Detroit Free Press quoted Lt. Darren Green of the Michigan State Police, who estimated several thousand cars were part of the demonstration, with 100 to 150 people on the Capitol lawn. Green said traffic was backed up for more than a mile around the Capitol in several directions.

Among those taking part was Republican Congressional candidate Mike Detmer of Howell, who gathered with supporters before heading to the protest in Lansing. A picture from Detmer’s Facebook page shows him taking a selfie with about a dozen people, none of whom are following social distancing guidelines. Also seen in the picture is an individual wearing a Proud Boys face mask and flashing a recognized white power symbol. The Southern Poverty Law Center says the group’s leaders, “regularly spout white nationalist memes and maintain affiliations with known extremists. They are known for anti-Muslim and misogynistic rhetoric. Proud Boys have appeared alongside other hate groups at extremist gatherings like the "Unite the Right" rally in Charlottesville.” However, a Proud Boys spokesperson says they reject that definition by the Southern Poverty Law Center, noting that they are currently suing the organization. “The SPLC has no authority to label anyone and has recently lost similar high profile cases and had to pay out large sums as a result.”

Detmer, who is seeking the GOP nomination for the 8th District, has since told WHMI he is not familiar with the man wearing the mask or the group, saying he thought the man was making an “ok” symbol in the background. He says he didn’t ask the man to be in the photo, there was just a group of people around his vehicle so he asked that they jump in for a quick selfie. Detmer said he has no idea who the individual or the group is or if it a white supremacist group. He further asserted that he did not notice the signage on the van and was just taking pictures, adding everyone received word at the last minute that their line-up was going to change so it was pretty chaotic. When asked if he would disavow the group, Detmer stressed they have nothing to do with his campaign and he knows nothing about them, adding he’ll have to do some research. Detmer said he didn’t want to disavow anyone because it could just be slanderous material. He said maybe they are and maybe they’re not but they are certainly not part of his campaign.

As for Wednesday's protest in Lansing, many particpants got out of their vehicles and raised signs, one of which read, “Gov. Whitmer We Are Not Prisoners.” Another said, “Michigander Against Gretchens Abuses.” The protest, called “Operation Gridlock,” was organized by the Michigan Conservative Coalition. “This arbitrary blanket spread of shutting down businesses, about putting all of these workers out of business, is just a disaster. It’s an economic disaster for Michigan,” coalition member Meshawn Maddock said.

State police said they would stay on the sideline unless people could get hurt. The protest made big ripples: Traffic was barely moving around 1 p.m. nearby on westbound Interstate 496.

Whitmer extended a stay-home order through April 30 and has shut down schools and businesses deemed non-essential. The governor acknowledged the pain but said the restrictions were necessary to stop the spread of the coronavirus, which causes a respiratory illness that has killed more than 1,700 Michigan residents.