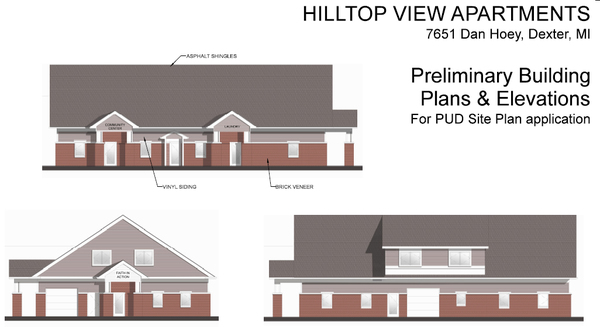 A plan to construct two-dozen affordable housing units in Dexter is a step closer to reality after the Michigan State Housing Development Authority announced last week more than $12.6 million in Low-Income Housing Tax Credits for 15 developments across Michigan.

Included in that is $874,756 for the Hilltop View Apartments being developed by the Avalon Nonprofit Housing Corporation in partnership with Chelsea-based Faith in Action, who together want to build 24 affordable housing units for veterans and families. MLive.com says the supportive housing will also include a community center, garden and food pantry run by Faith in Action. A public hearing in September brought forth some resident concerns that questioned the need and location of the project, with opponents saying it isn’t clear how many Dexter residents would actually qualify to live at Hilltop View. They also questioned the fact that City Manager Courtney Nicholls is on the Faith In Action board of directors, although city officials pointed out that she is a non-voting member of the council and her role with the group had been previously disclosed.

The City of Dexter reached an agreement with Avalon to sell the 1.75 acres of land on Dan Hoey Road earlier this year for $187,000. However, the deal was contingent on Avalon receiving the tax credits, which would provide 85% of the project’s funding. The project still needs final site plan approval from Dexter Planning Commission and Council. (JK)