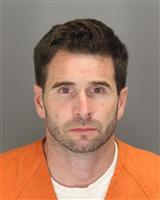 Sentence has been handed down to the man charged with a break-in at the Scorpions Motorcycle Club in Lyon Township.

40-year-old Kinley Rae-Thomas Kelm pleaded no contest last month in Oakland County Circuit Court to charges of breaking and entering with intent, larceny of firearms, being a felon in possession of a firearm and two counts of felony firearms. A no contest plea is not an admission of guilt, but was considered as such at his sentencing Wednesday, when a judge ordered him to serve between 29 months and 30 years in prison. He was also ordered to serve a consecutive two years on the felony firearms conviction and must pay $10,000 in restitution.

Kelm was charged after police say he was identified as a suspect in the break-in the Scorpions Motorcycle Club headquarters building on Milford Road that took place on September 22nd, 2017. Members of the club witnessed him wearing a Scorpions t-shirt in the days after the crime. When questioned about his affiliation, he provided answers that made them suspicious and alert police.

The club was severely damaged in a fire that authorities say broke out as a result of the break-in, likely when propane lines were damaged by a Bobcat loader that Kelm used to crash through the clubhouse wall and move a large safe. (JK)