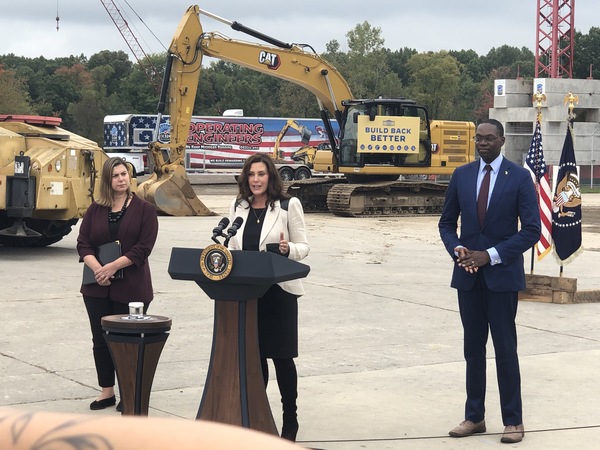 The President called this moment of time in America an “inflection point” where we have to choose which direction we are going to go. He claims his multi-trillion-dollar Build Back Better plan will help the country regain the momentum it once had when the United States was known for having the world’s best physical and human infrastructure.

Biden said that passing these bills will lift many, including those that train at the Howell facility, into the middle class. He said, “We’re gonna put hard-working Americans, like the Operating Engineers here in Howell, on the job to bring back our infrastructure and bring it up to speed. Good union jobs. Not 12, 15, 18 dollar - prevailing wage jobs...wage that gives you dignity that you can raise a family on, that you can hold your head up. This is a blue-collar blueprint for how we restore America’s pride.”

Biden said the Build Back Better plan will create good jobs, create clean energy, and provide safe and affordable housing. He said it is about giving working families a chance to earn a paycheck, and “if you want proof, just come to this training facility. This is where hard workin’ folks come to learn to operate road graders and so much more. Where workers use virtual reality to master operating a crane. Where they learn to deal with drones to look under bridges and so on. Where young people in Michigan show up and emerge as expert technicians, engineers, heavy equipment operators. They leave here with a shot at something great. A union job with good wages and benefits that allow them their dignity and their pride. It’s a ticket to the middle class.”

The President went on to talk about electric vehicles being the future and the importance for automakers in the U.S., and especially Michigan, to lead the world. Biden said he wants those jobs in Michigan, not halfway around the globe. His bill would pave the way for a national network of charging stations across the country.

He also called for an extra 4 years of free education for youths, with 2 years of early childhood learning and 2 more of community college bookending the standard K-12 education path. The President’s plan would also provide for child care tax credits.

Republicans and some moderate Democrats have criticized the plan for its high price tag. Biden said that it would be paid for by the very wealthy who, he said, have not been paying their fair share of taxes. He pointed to 55 corporations that made $40-billion and paid zero in federal income tax. The president said there is no reason that millionaires and billionaires should be paying a lower tax rate than the working class. Biden again stated that no one making under $400,000 will see a penny of their taxes going up.

Also speaking at the event were several elected state Democrats, including Governor Gretchen Whitmer and Lt. Governor Garlin Gilchrist, speaking in support of meeting infrastructure needs. Gilchrist said that the investments we make today will meet the challenges we have in this particular moment and prepare our imaginations to run wild into the future. Whitmer said infrastructure is critical to every Michigander and that they are focused on the future of mobility and electrification.

8th District Congresswoman Elissa Slotkin also spoke to the crowd. She said that the Operating Engineers’ site was the best place to discuss this bill “because the folks sitting in front of us will be the ones clearing the roads, repairing the bridges, running the buildings, reinforcing the dams that haven’t had serious investment in over a generation.” Slotkin continued, saying, “I have traveled around my district to every corner of it and lots of people have lots of priorities, but the infrastructure issues that Michiganders face unites us all… We all need safe roads to drive on. We have 7,300 miles of highway in poor condition. We all need better infrastructure for our water, particularly with all these storms. We all need clean drinking water because of PFAS and lead pipes. We all want our kids and businesses to be successful in the 21st century, so we need reliable internet. That is particularly important in Livingston County where 1 out 10 households does not have access to high-speed broadband.”

Slotkin also released a statement after the event, in which she said that she told the President "that the ‘human infrastructure’ bill needs to be both transformative and targeted: transformative by expanding access to affordable child care for working families and letting Medicare negotiate for lower drug prices; and targeted by ensuring that the package is fully paid for, doesn’t pass on more debt to our kids, and doesn’t saddle working class families with the bill. These have been my criteria for this bill from the start and that’s what I told the President this afternoon. I’m grateful for his leadership in getting us through what I hope is a few short weeks more of negotiations.”

Biden closed his speech saying that it is time to step up again and that the challenge today is one of economic competition. He said we must invest in ourselves to show the world that American democracy works.

Though he had the support of many inside the facility, outside the site it was a different story. A crowd of hundreds, led on by the Livingston County Republican Party, lined up early along M-59 near the training center and stayed late in protest of the President.