Community Weighs In On Proposed Power Plant For Handy Twp. 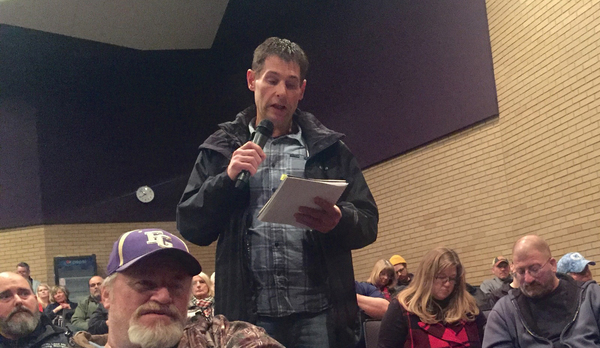 A proposed project to construct a power plant in Handy Township came under community scrutiny and praise at a Planning Commission meeting Wednesday.

Commissioners met in the Fowlerville Junior High School’s auditorium in anticipation of a large turnout, which they received. There, community members shared their thoughts on an electrical power plant that could be built north of Mason and Truhn Roads. Competitive Power Ventures has an option on the property, giving them a two-year due diligence period to decide whether it’s an appropriate location for their plant.

The Planning Commission was tasked with voting on resolutions related to the project, including amending the zoning map to allow for research and development uses, amending the ordinance to regulate energy plants and amending the township’s master plan to determine land use. Commissioners voted unanimously to approve all three resolutions. The first two must receive approval from two other governmental bodies to become official, however the master plan amendment is final. Kate DeRosier attended the commission’s meeting as an active member of the local Sierra Crossroads group and an opponent of the project. She disagreed with the commission’s decision to amend the master plan, saying it was an opportunity to uphold the deliberate process in formulating the master plan 10 and a half months ago.

Other project opponents cited a potential decrease in property values and environmental impacts as reasons of concern. Groundwater usage was also brought up, specifically the amount the plant would use per day. Frank Munsell, who owns part of the land being considered for the project, says compared to the amount used by neighboring communities, 400,000 gallons per day "is not a big deal" in the grand scheme of things.

Marion Township resident Rich Benson told commissioners if approved, the plant would benefit the area by bringing in jobs, boosting the economy and increasing electric reliability. But Andrew Nowicki of Cohoctah Township felt there was more discussion to be had about the project’s effect on the economy. Nowicki says it is a misconception that the environment is separate from the economy and that economic decisions cannot be made without factoring in the possible environmental impacts.

In addition to the resolutions, the Planning Commission also considered and approved the property owners’ request to reduce the amount of acreage that would be rezoned from 145 acres to 125 acres south of Sargent Road. The township’s Board of Trustees will make the final decision on the resolutions, excluding the amended master plan, though a date for a meeting to consider them has not been determined at this time. (DK)