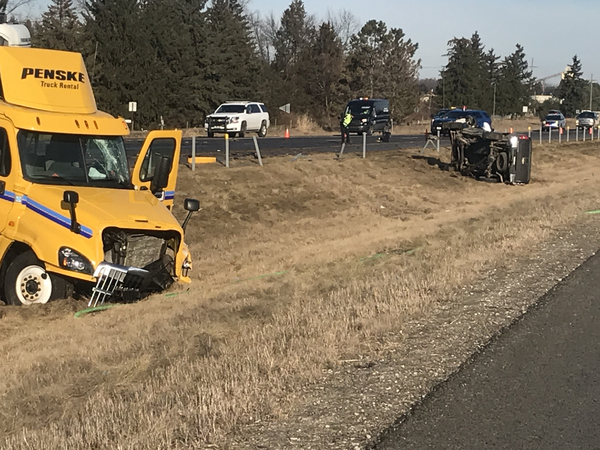 Details are being released about the fatal crash that closed down US-23 Monday for more than five hours.

Green oak Township Police say that they were dispatched at 8:47am along with the fire department to a report of an injury crash on US-23 between Silver Lake Road and Lee Road. Officers were advised that a northbound pickup truck had crossed the median and struck a southbound semi-truck. Upon arrival, responding personnel found that a 2008 Chevrolet pickup truck had been traveling north on US-23 and crossed the median, traveling into the cable barrier and striking a 2015 Freightliner semi-tractor and trailer that was traveling southbound. After striking the semi-tractor the pickup truck was pushed back into the median, coming to rest on its side, entrapping the driver.

The driver of the pickup, 52-year-old Duane Arthur Buers of Whitmore Lake, was pronounced as deceased at the scene by first responders. Prior to crossing the median and subsequent crash with the southbound semi-tractor, Buers had been involved in another collision on northbound US23 with a 2016 Ford F250, being operated by a 41-year-old South Lyon man. Police say the investigation into the circumstances of the entire incident continues.