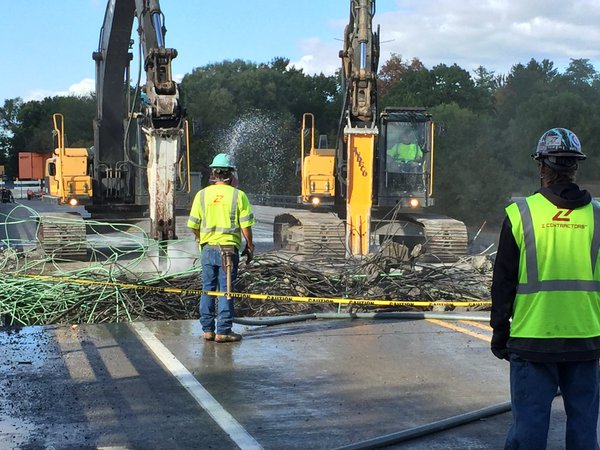 The Pleasant Valley Road bridge over eastbound I-96 in Brighton Township is slated for reconstruction later this year.

The Michigan Department of Transportation had to remove a portion of the Pleasant Valley Road overpass across eastbound I-96. The bridge was damaged on September 27th in a crash involving a flatbed semi hauling several boom lifts. M-DOT engineers determined that the structure over eastbound I-96 had to be demolished and the resulting gap has created issues for residents and commuters, as well as nearby businesses that have much reduced foot traffic.

Design has been approved and the reconstruction project is estimated at $1.3 (m) million but will go out to bid in March or April. The contractor awarded the project will need minimum of six months to get the steel bridge beams fabricated, which have to be made on demand.

M-DOT Spokeswoman Jocelyn Hall says things take time and they recognize the public inconvenience. Hall says that’s the unfortunate side of these types of unexpected projects that come out of nowhere, because there is no way to let local residents and businesses know ahead of time of potential impacts to their routines. Hall told WHMI it’s a delicate balance between getting something back open quickly, but also making sure that the product is acceptable. Hall says with normal bridge reconstruction, a project would be planned out years in advance for funding, design and other factors. She says M-DOT is looking forward to getting the project going and completed in November, acknowledging there are certainly traffic impacts, as well other impacts to residents and business owners in the area. Hall stressed that it is a priority for M-DOT to get something done as quickly as possible but noted the standards and safety criteria they must abide by.

M-DOT will seek reimbursement for the cost of demolishing and replacing the bridge. The Waterford man employed by MacAllister Machinery Rentals in Wixom was cited for operating an over-height vehicle and careless driving. (JM)