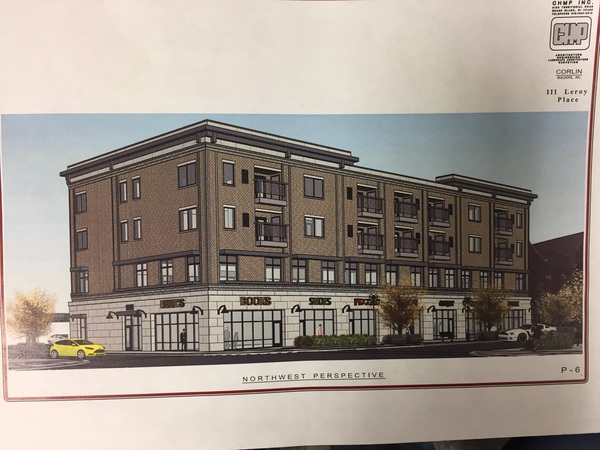 Officials for the City of Fenton are recommending site plans be approved for a mixed-use development that has been in the works for the last couple of years.

Ghassan Saab, Project Manager for Corlin Builders, Inc. of Grand Blanc, says the Cornerstone II project has been in the works for a couple of years now and has now “reached a pretty big stage”. A final site plan for the development, which is set to be located on LeRoy Street between the existing Cornerstone building and the Fenton United Methodist Church, came before the city’s Planning Commission Thursday night for review.

Carmine Avantini, a consultant with Community Image Builders (CIB), says the Cornerstone II building won’t have the exact same design as the original Cornerstone building but “compliments it”. At just over 41,000 square-feet, the four-story building will be mixed-use. The first story will serve as retail space, the second for office space, and the third and fourth stories will each have seven apartment units. While several planning commissioners said they like the look of the building, Commissioner Michael Morey was not entirely pleased. Morey took issue with some pieces of the project, like a building height waiver to allow for the proposed 54-foot tall building in the Central Business District, which has a maximum building height limit of 35 feet.

Morey also said he didn’t understand the Downtown Development Authority’s “reluctance” to communicate with the planning commission about the project and suggested changes, adding that if they had communicated, they “could’ve worked out something a lot better than this”, referring to the final product. Councilman David McDermott didn’t necessarily agree with Morey’s accusation, saying that he doesn't think there was reluctance to communicate but that they could talk about it later.

Ultimately the planning commission voted to recommend approval of the development’s final site plan, contingent on a few conditions including submission of a detailed signage plan. Morey was the lone dissenting vote. The site plan must now receive approval from city council before the project can move toward construction. (DK)