Plane May Have Clipped A Tree Before Crashing Into Lyon Twp. House 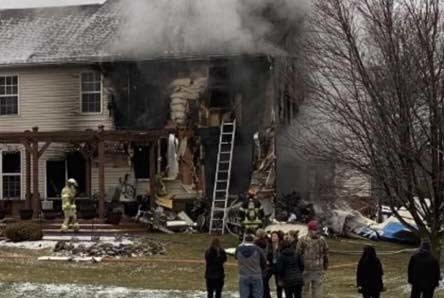 
Authorities are investigating an eyewitness report that a plane hit a tree just before crashing Saturday afternoon in Lyon Township, killing a family of three.

Just after 4pm Saturday, a single-engine Piper PA-24 crashed into a home on Dakota Drive in the Orchards of Lyon subdivision, killing the pilot and two passengers. They have been identified as 60-year-old David S. Compo, his 55-year-old wife Michele and their 18-year-old son Dawson. Compo, the former president of the Home Builders Association of Southeastern Michigan, was reported to be an experienced, licensed pilot, who had flown to Canton, Georgia, on Dec. 29th. The family was reportedly returning home Saturday when the crash occurred.

Peter Knudson, a spokesman for the National Transportation Safety Board, told The Detroit News that a witness reported the plane “emerged from the cloud deck and shortly thereafter struck the tree, and then struck the house."

The five occupants of the home were able to escape. A GoFundMe page set up by a neighbor identified them as the Mudzwova Family, and was seeking $20,000 to help them with their expenses following the loss of their home. As of this morning, it had raised nearly $23,000.

Federal aviation officials expect to have a preliminary report on the circumstances surrounding the crash within the next two weeks.