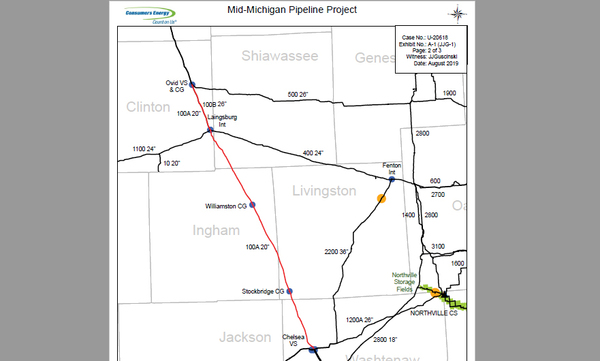 
A pipeline project that will cross through Livingston County has been given approval by state regulators.

The Michigan Public Service Commission Thursday approved an application by Consumers Energy to build the Mid-Michigan Pipeline, a 36-inch natural gas pipeline costing an estimated $550 million, replacing the existing Line 100A between Ovid and Chelsea. Consumers is intends to replace the existing 20-inch pipeline that’s more than 70 years old that utility officials say will remove a gas-supply bottleneck in the smaller pipeline.

Construction of the new 56-mile pipeline is expected to begin in 2023 and wrap up the following year. Consumers proposed rerouting portions of the pipeline to avoid more densely populated areas, particularly around Chelsea, to more rural areas with farms and woodlands, along a route spanning Clinton, Ingham, Livingston, Shiawassee and Washtenaw counties. The Commission’s order determined the replacement pipeline will also address corrosion issues and seam weld and other anomalies on the pipeline while not detrimentally affecting the environment or state’s natural resources.

Consumers Energy was also ordered, where appropriate, to restore affected wetlands along the pipeline route to preconstruction conditions.