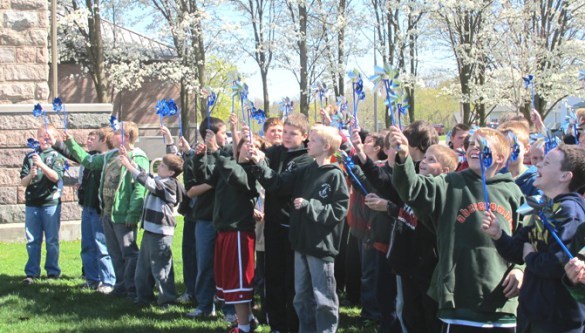 Blue pinwheels will begin popping up across Livingston County this week as part of local efforts to recognize April as National Child Abuse Prevention Month.

LACASA’s Child Abuse Prevention, or CAP Council, has several awareness activities planned for their yearly “Pinwheels for Prevention” campaign. Child Abuse Prevention Month kicks off in Livingston County with the CAP Council’s annual Plant a Pinwheel Celebration, which will be held this Wednesday at the Howell Carnegie Library. Community members will gather at noon for a ceremony that will feature the fifth grade choir from Voyager Elementary School and various speakers. This year’s event will also include the presentation of the Champion for Children award, which recognizes someone who goes above and beyond for local kids. The ceremony’s main event invites guests to plant a blue pinwheel outside of the library. The pinwheel is designated as the national symbol for child abuse prevention and what CAP Council Coordinator Holly Naylor says is an aspirational idea. Naylor says the pinwheel is symbolic of a carefree and playful childhood, which is what all kids should have.

LACASA is also offering pinwheel home garden kits and pinwheel bouquets for residents that want to plant their own. There are suggested donation amounts for the kits and bouquets, with the funds that are raised going toward expanding abuse and neglect prevention efforts in the county.

Naylor notes that there are several other prevention and awareness activities throughout the month that community members can participate in. The CAP Council will be in Lansing on April 25th, Child Abuse Prevention Awareness Day, for a gathering on the Capital steps. Other events include a “Stewards of Children” workshop, which is a program that teaches adults how to recognize, respond to, and prevent child sexual abuse.

Naylor says it’s important to acknowledge that child abuse and neglect can happen anywhere. “The Power of One” is the theme of CAP Month. Naylor hopes the campaign will leave community members with the understanding that child abuse prevention isn’t just about making a report or supporting those who are already victims of abuse. She says it’s also about building up families and supporting one another; something everyone can play a small role in.

More information about the Pinwheels for Prevention campaign and other activities can be found at the link below. (DK)