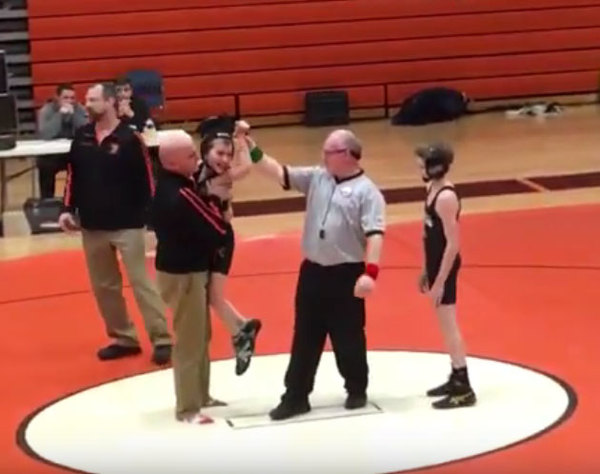 A local wrestler put his opponent first to create a special memory.

Pinckney middle school student Levi Podhola, who is an eighth grade wrestler at Pathfinder, faced an opponent from Tecumseh last Thursday night with cerebral palsy, 5th grader Kanton DeClercq. In order to give him a night to remember, Podhola allowed his opponent to receive the victory. A tearful scene followed, with hugs all around.

Tecumseh 6th grade Teacher and Coach Joseph Bundas tells WHMI he goes around to all of the 5th and 6th classrooms to get kids involved in the sport and his aide told him that Kanton was interested in being a manager. When Kanton was asked why he wanted to be a manager, he said his dream is to compete in the WWE. Bundas says he explained to him that if that was his dream then he has to start somewhere and he should be a wrestler, not a manager. Last Thursday was the team’s first home match and he spoke with the Pinckney Wrestling Coach TJ VanDoren about getting him a match, who agreed and it all came together that day. Bundas added that Kanton has a great attitude and does what he can at practices.

Pinckney Superintendent Rick Todd stated "Being a Pinckney Pirate means so much more than achieving excellence, both in the classroom and out. For us here in our community, being a Pinckney Pirate means giving back to others, being humble, serving the greater good and quite simply, being the type of person that would make our parents, family, neighbors and community proud. Recently, Pathfinder 8th grade student, Levi Podhola, lived up to these very qualities when he wrestled a fellow peer from Tecumseh, a young man whose spirit is strong, but his body frail as a result of having cerebral palsy. As you will see from the video linked below, our Pinckney Pirate rose to the occasion by making a memory for this young man and his family that will last a life time. Thank you to Levi and his parents who have done an outstanding job teaching him what really is important as we are so proud he is a PIRATE!!!".

A link to the video is provided. (JM)