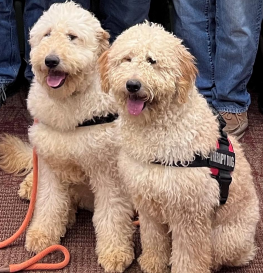 Fundraising was initiated in December 2021 and in less than six months, the district says generous community members donated over $20,000 to secure three dogs.

A press release states an anonymous community member will match up to $10,000 in donations for a therapy dog for the high school.

Superintendent Rick Todd said they are beyond excited and humbled by the support they’ve received from the community as they look to support the social-emotional needs of students through their vision of developing a district-wide therapy dog program.

Todd says the generosity shown in just the past three months has been overwhelming and allowed them to not only purchase their first dog but positioned them to begin the process of obtaining their second - with the ultimate goal of obtaining five district-wide.