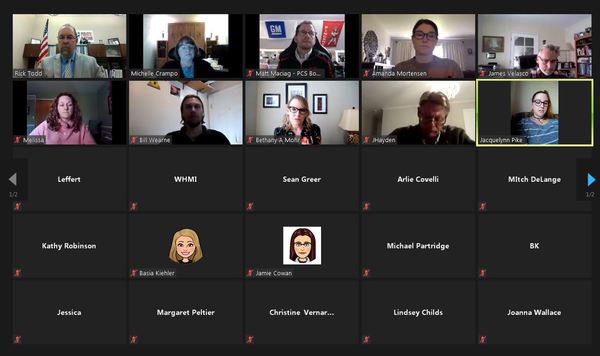 
Parents against mask mandates spoke out at the Pinckney Community Schools Board of Education virtual meeting on Thursday night.

About a dozen who spoke are believed to be associated with Unmask Livingston, which has been showing up at various governmental meetings, forcing the Howell school board to adjourn a recent meeting when they refused to wear masks. In addition, the video of a Livingston County Board of Commissioners meeting from last week was rejected by YouTube based on repeated misstatements from residents opposed to mask requirements.

At Thursday night’s meeting for Pinckney Community Schools, many of the same statements were repeated, with one individual threatening to replace board members for enforcing state health department guidelines for mask use in schools. Despite that, other parents spoke up to defend the district, saying the board has done a wonderful job with being transparent, especially with case reporting, keeping children’s best interests at heart, and following CDC and state guidelines.

District Parent Colleen Flanagan said she’s very pleased with the mask mandate and that the district is following rules that have been scientifically shown to reduce the virus aerosols and droplets in the air. She likened wearing a mask to wearing pants at this point and thanked community leaders for following the science and having common sense.

One parent commented the board is being attacked for things out of their control, saying that masks do help prevent the spread of the virus, and it’s unfair they have to endure baseless attacks and threats at a time like this.

Only a few people who spoke out against the mask mandate provided addresses so it was unclear if they actually had any children who attend Pinckney schools.