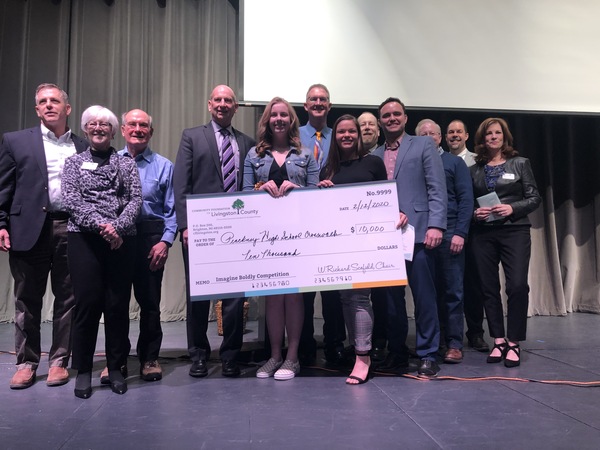 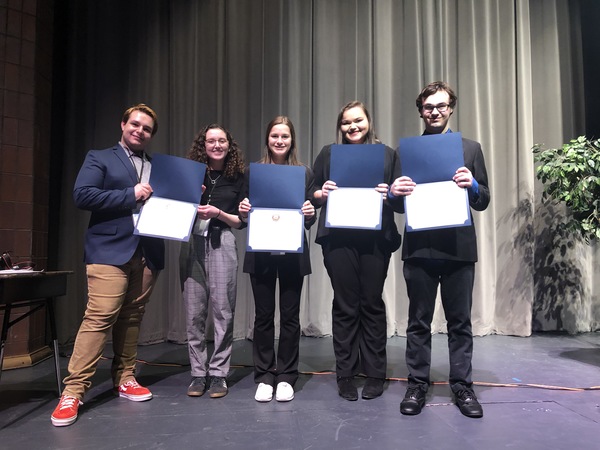 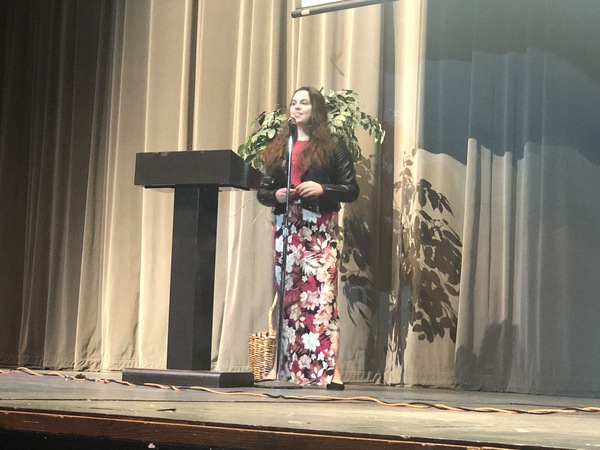 A new crosswalk to help give Pinckney High School students safer passage across a dangerous road will be built thanks to a winning grant presentation by a group of concerned students.

The Community Foundation for Livingston County held their first Imagine Boldly competition at the Jane Tasch Performing Arts Theater, in Pinckney, Wednesday night. The Foundation asked students from Pinckney High School and Pinckney New Tech High School what they would do with $10,000 to fund a project that would positively impact their community. Eight teams of students stepped up to the call.

After tabulating votes from the audience and a panel of judges from the Community Foundation, Sheriff Mike Murphy, and Superintendent Rick Todd, a project from 4 students to construct a crosswalk across Dexter-Pinckney Road at the high school was selected as the $10,000 grant winner. Eleventh-graders Grace Eliott and Sophia Oakes represented their team on stage. Elliot likened crossing that stretch to the high school to playing Frogger, while Sophia Oakes said she herself has almost been hit a couple times. Teammates Samantha Armstrong and Cole Evans also helped, but weren’t present. The team recognized that the project would cost more than the grant awarded, but said they were already in discussions with Pinckney Chrysler and the Village for support.

Another presenter, Karly Blaszkowski, wanted to win the grant so that she could implement an opiate-awareness program where inmates would come to health classes at the school and share their stories and answer questions from students. Sheriff Murphy said during the awards ceremony that he took that project out of consideration because that was something he and the Sheriff’s Department would be willing to work with Blaszkowski to do without the grant money.

In other presentations, Annabelle Sharpe proposed starting a music program, with an emphasis on guitars, for less fortunate children. Margo Ritter shared a need for learning aids to help hearing and vision impaired students. A team of Grace Gross, Thomas Wawrzyniak, Evan Woehlke, and Kyle Perry presented in favor of a community center for students to socialize at, after school. Katie Marhofer and Brooklynne Lopez also wanted a downtown hub, but one for giving those with special needs improve their social skills and feel like outcasts. Noah McGeachy and Rebecca Black proposed an intuitive that would lower light pollution in the county and then help students explore the night sky and the billions of stars out there. Emilia Edwards and Christopher Tolfree worked on a proposal that would construct a dock at Honey Creek that would help science classes with projects. Tolfree presented last and closed thoughtfully, saying that all these projects were “going to a good cause, and no matter who wins, we all do.”

Superintendent Rick Todd with impressed with each the presentations and the drive of the students participating. He said this was like getting to look through a window to the future and seeing what is waiting for them in terms of leadership and change.

Community Foundation Chairman of the Board Rick Scofield was also impressed. He said, “...when you put something like this together for the first time, you never know how it’s going to be. Especially the five that organized it- it was well put together. He continued, “This is one of the things we talk about in a lot of places- ‘how do you nurture the next generation of leaders?’ This is how you do it. You give ‘em a chance to think about an idea, a chance to present it… Phenomenal, just Phenomenal.”

The event was organized by 5 students from Pinckney New High Tech- Sarah Dorash, Brandon Loy, Katie Kramer, Michael Griffin, and Casey Orr. They not only received internship credit for all their preparation and execution, but they also received Certificates of Congressional Recognition from 8th District Congresswoman Elissa Slotkin, as presented by her Livingston County liaison, Mona Shand. (MK)