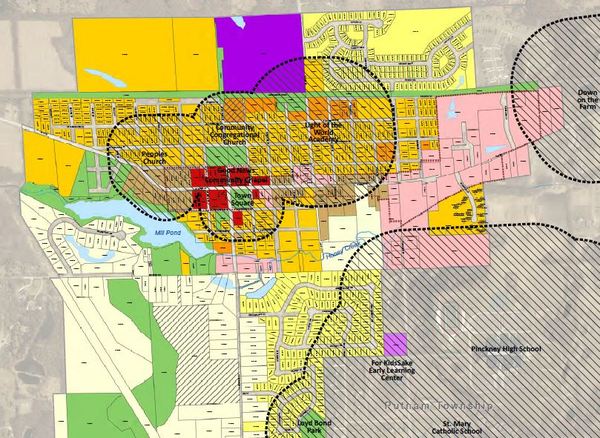 The Village is working under what’s said to be a tight time crunch to get the zoning standards drafted and adopted, as required by an ordinance associated with the ballot proposal. It was put forth by Jobs For Pinckney, a grassroots group headed up by Sam Pernick of Oakland County. The proposal passed by 117 votes, with 54% of the vote. The ordinance specifies that various licenses must be granted for various types of recreation marijuana facilities, which are defined in the Michigan Regulation and Taxation of Marihuana Act or MRTMA. The ordinance states that pursuant to the Michigan Regulation and Taxation of Marihuana Act, the Village shall authorize a maximum of two licenses to marijuana retailers and a minimum of one license each for a marijuana microbusiness, Class A grower and designated consumption establishment. One license each would be granted to the following; a safety compliance facility, a secure transporter, processor, and Class B and Class C growers.

Commissioners reviewed the different aspects of the draft zoning ordinance during the meeting and made a few changes but all were comfortable with the general content. It was stated the Village has been fielding lots calls on every aspect of what was described as a “hot topic”. Chairman Tom Pais commented there was a lot of work put into the draft ordinance by a committee and he thought it turned out pretty well. Township Planner Lucie Fortin stated they’re basically adding a special land use, a process for which is already established. She said the commission’s role was to decide preferred zoning districts and what special criteria would be put in place. She commented the approach was conservative and the Village could start with the two districts and then if comfortable, move from there – noting it’s more of a specialty use.

Nothing will be permitted in the central business district. The ordinance would allow facilities in the secondary business district and the research technology office district. Hours of operation would be limited to between 9am to 9pm and a security presence will be required. All vehicle access for marijuana establishments located in the SBD must be directly from M-36/Main Street or Kirkland Court. Signage may not depict or reference marijuana or related paraphernalia and must be approved by the Planning Commission and will be evaluated on an individual basis. An odor control plan must be submitted to the Village and not have any negative impact on neighbors.

Any facilities must be located at least 1,000 feet from any school and at least 500 feet from a religious institution, licensed daycare facility or local park – which was said to be fairly typical in marijuana zoning ordinances. A draft map shows a 1,000 foot buffer from Pinckney High School, St. Mary’s Catholic School and Light of the World Academy – and a 500 foot buffer from the For Kids Sake Early Learning Center, People’s Church and the Community Congregational Church.

Any applicant needs to be pre-qualified by the state before applying to the Village for a special land use/site plan application. It was stated there would be an open application period and then a competitive ranking process to grant any licenses.

The only public comment came from Chris Bonk of Howell, who owns the old Pinckney Elementary School on M-36 near the Village limits. He seeking to operate a combination growing, processing and retail center and stated the property value is worth more now with the different use. That would likely fall under the microbusiness category. Bonk said he thought it would be a good way to generate vehicle traffic through downtown and the outskirts of the Village. He will first be seeking a rezoning of the property to RTO before applying for a license.

The proposed zoning ordinance will be submitted to township attorney for review, ahead of a public hearing that will be held December 7th. The Planning Commission is expected to issue a recommendation to Council at that time, which could approve it as presented or make changes.

The draft ordinance and buffer map are attached.