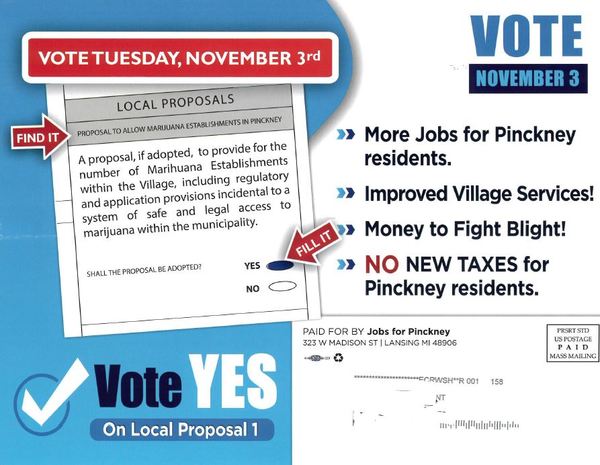 
Flyers circulating throughout the Pinckney community about an upcoming marijuana ballot proposal are causing some confusion among voters.

The flyers appear to be circulating in the 48169 ZIP code, which includes portions of Putnam and Hamburg townships, as well as the Village of Pinckney. However, the ballot proposal will only appear for voters in the Village of Pinckney on November 3rd. Putnam Township administers elections for the Village and Township Clerk Sally Guyon tells WHMI they’ve been fielding calls and questions about the proposal, but those should be directed to the Village. She says the proposal is strictly for voters who live in the Village, which is Precinct 3. Guyon says anyone who lives north or south of M-36 or south, excluding the Village, are Putnam Township voters. Guyon noted ballots were mailed out September 22nd. The ballots for the Village had to be reprinted to include the marijuana proposal per court order. Those new ballots were mailed out two days later on the 24th.

Meanwhile, the Pinckney Village Council is working on communications to help educate voters ahead of the election and dispel a myriad of claims being made on the two flyers. The proposal was put forth by a grassroots group called Jobs For Pinckney, which is headed up by an Oakland County resident. The flyers advertise hundreds of new jobs, prioritized hiring of local residents, improved Village services, millions of dollars in new economic development being brought into the Village, a grant program to support new small businesses in the Village, thousands of dollars in new tax revenue and licensing fees, and the redevelopment of blighted, abandoned and vacant property.

Village officials dispute the claims being made and a fact sheet is currently being put together that will be posted on the Village website. The flyers are attached, along with the petition ordinance. A link to the Village website with information about the proposal is also provided.