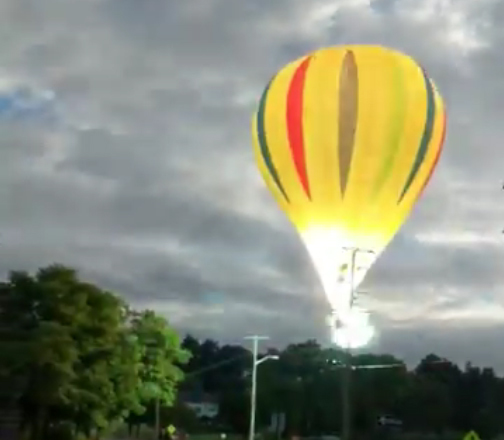 An investigation by the Federal Aviation Administration is expected after Sunday morning’s incident in which a hot-air balloon hit a power line near the beach area of Thompson Lake in Howell.

The pilot was in a group of pilots for a morning launch on the last day of the Michigan Challenge Balloonfest. A Facebook video posted by Brian Karrick II (link below) shows the balloon hit a live power line near the boat launch area at 7:40 a.m. A loud electrical buzzing was followed by flames appearing at the bottom of the balloon. A man on the video, presumably a member of the balloon's crew, is heard yelling for everyone to get back and then calling up to the pilot to see if he's injured. He then yelled for the pilot to, "put it in the water!"

And the pilot, believed to be a Mason man, did just that, directing his crippled balloon to the waters of Thompson Lake, where he was pulled out by two people in a fishing boat. According to Howell Fire Department Chief Andy Pless, the pilot, who has not yet been identified, was not injured. Livingston County EMS, the Howell Police Department and the Howell Area Fire Department all responded to the scene.

When the balloon hit the power line it resulted in a power outage to the immediate neighborhood, knocking out power to about 40 customers, which was later restored. (JK)