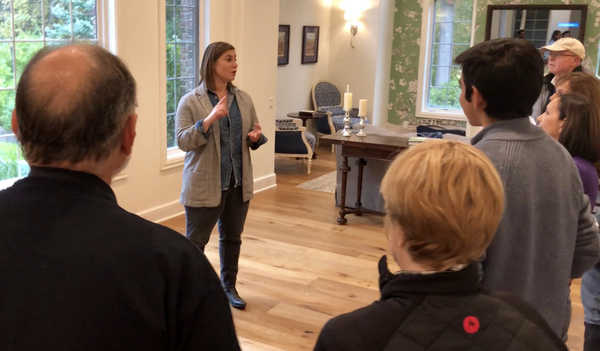 Vice President Mike Pence has campaigned for Republican candidates ahead of next week's election, including 8th District Congressman Mike Bishop.

Pence (top left) spoke Monday afternoon at an event in Oakland County for Bishop (top right), who is facing a challenge from Democrat Elissa Slotkin, and Lena Epstein (top center), who is running against Democrat Haley Stevens for an open congressional seat in the 11th District. The two races are competitive and are expected to help determine which party controls the House. Bishop told the crowd that Slotkin didn’t represent the values of the district. "She's never lived her before, she never lived in the district before, she's never owned property...the first time she voted (in the district) was for herself in the primary. We've got billionaires from California, from New York City, these elitists who want to come here and buy up this district. They are so angry that...they lost in 2016 and they will do anything they can to buy this district back." Slotkin's campaign has consistently pushed back on those claims, pointing out that she grew up on her family's farm in Holly, where she now lives since returning to the state last year.

Bishop also made his case about the difference in their approach to the economy. "I worked with the Trump-Pence Administration to bring tax cuts to businesses and families. My opponent wants to repeal those tax cuts and has called for boycotts of businesses who support me and I have been working to help my whole career. That’s the choice this November.” Pence then finished the rally, telling the crowd "All that talk about a blue wave, let's just make sure that blue wave hits a red wall right here in Michigan."

Meanwhile, Slotkin was canvassing homes in Brighton over the weekend, telling supporters (bottom picture) that she hoped to help bring a different tone to Washington. "My husband and I decided to do this together because we've never really been political people. He's a 30-year Army veteran. I'm a former CIA officer. You don't do a lot of politics when you're in those roles, but we just felt having worked for Democrats and Republicans that the tenor and tone of what's going on now is fundamentally different. It's just a different thing and fundamentally unbecoming of the country that we all love."

Slotkin will campaign on Thursday with former Vice President Joe Biden in Lansing with Democratic gubernatorial nominee Gretchen Whitmer and Senator Debbie Stabenow. After the rally in Oakland County, Pence spoke in Grand Rapids at a get-out-the-vote rally for U.S. Senate nominee John James and other candidates. James is running against Stabenow. James will also be the keynote speaker at tonight's Reagan Day Dinner for the Livingston County Republican Party. (JK)