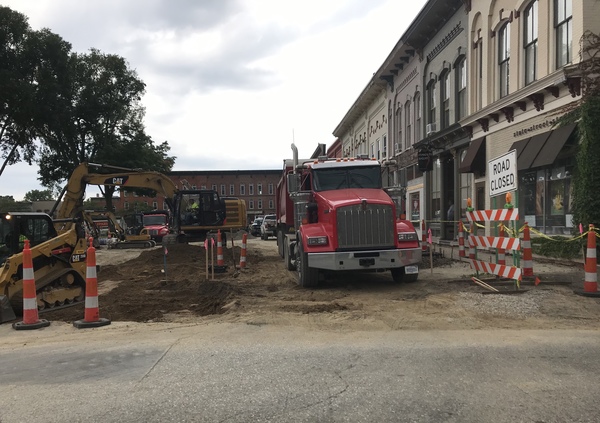 Paving work will be taking place this week as part of the State Street reconstruction project in downtown Howell.

Interim City Manager Erv Suida says the project is coming along nicely and the base on State Street was put in Monday, with paving work starting Tuesday. Suida says concrete will be going in and continue through the entire week. If that wraps up Friday, he says the paving portion of State Street should be done and then they’ll be looking at tree planting and installing light poles and some other amenities. He says it’s been a pretty successful project and the pavement work in the alley is done but some electrical work remains. Suida says crews will start tying in the overhead electrical into the underground and energize that before essentially “killing” the overhead power and removing two poles in the private alley. After that the alley will be substantially complete although Suida says there will also be some rope or string lighting that goes through there and they have plans together for that.

Suida said the contractor and city staff has done a great job. He stressed that business owners have been very patient and understanding and the project probably wouldn’t have went as smooth if it wasn’t for them. The majority of the project is being funded through a state grant and State Street is being reconstructed as a festival street that is completely barrier free, along with both alleys in the vicinity. Water mains and sewer lines have also been replaced along with storm sewer.

If everything continues to go as planned, Suida says they’re probably looking at an end of September or early October finish. A ribbon cutting event is in the works, tentatively scheduled for the second week of October. (JM)