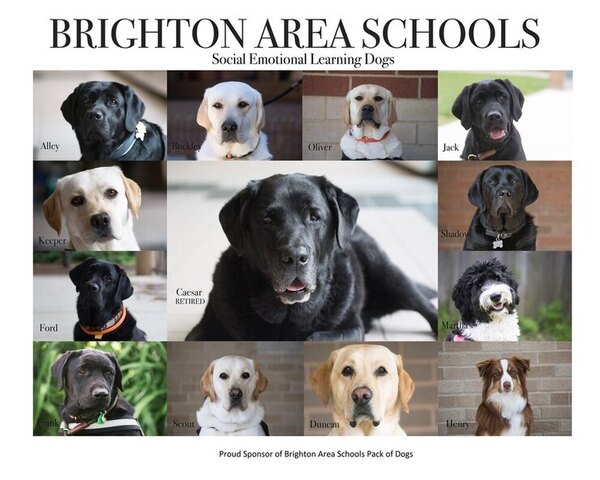 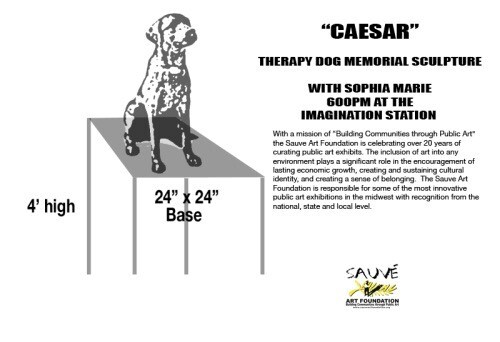 A statue dedicated to the Brighton Area Schools’ Pack of Dogs program will be unveiled this Saturday, September 10th, at the Imagination Station playground in downtown Brighton.

Karen Storey, who founded the social-emotional-learning dog program, says that the sculpture will be a likeness of Caesar - the first therapy dog in the Brighton Area Schools, who has since passed on. Storey asked John Sauve, a Brighton-based artist and chairman of the non-profit Sauve Art Foundation, to select the sculptor and he commissioned Sophie Marie, an internationally known artist from Montreal, Canada, to do the nearly 3-feet tall sculpture.

“I contacted the best person I know, and that’s Sophie,” Sauve said.
Sauve is also impressed by the work ethic of Storey, saying, “She goes above and beyond; she’s amazing.” As an example, Storey arranged for the Brighton Pack of Dogs to be the first therapy dogs to go to Oxford last year to comfort students in the wake of a tragedy in which four students were shot and killed by another student.

Storey is busy as it is with her full-time position as the MTSS facilitator at Maltby Intermediate School. MTSS is the Multi-Tiered System of Supports and is the framework that many schools use to provide targeted support for struggling students.

Storey says the dog statue is being given to the entire Brighton area community as a “thank you” for its unwavering support since the inception of the program several years ago. The dog program is entirely self-supporting, with the funds with which to operate it coming entirely from private donations.

Since its tentative start a dozen or so years ago, the program has expanded each year to the point where there is now at least one dog for each school in the Brighton Area Schools...even the pre-school program, Tot Spot. The dogs are Alley, Buckley, Chevy, Duncan, Ford, Frank, Henry, Hope, Jack, Keeper, Oliver, Scout, and Shadow.

Storey says that during the Labor Day holiday weekend the dogs were filled with anticipation at the start of school Tuesday “They are so filled with excitement and ready to greet the kids and staff,” she said.

Storey says the Brighton Pack of Dogs will be ready during the school year to meet any situation with their calm and reassuring demeanor — whether in any of the Brighton schools or any school district in Michigan that needs their assistance, Storey remarking that, “They are always ready to help others.”

The unveiling and dedication of the sculpture of Caesar will take place at noon Saturday at the playground, located next to the Mill Pond in downtown Brighton. Various dignitaries, such as Brighton Mayor Kris Tobbe and those from the Brighton arts community, will be in attendance.

There will be many fun events taking place in conjunction with the sculpture unveiling including a scavenger hunt, raffles, prizes and other activities. Pack of Dog volunteers will also be accepting donations for the program at that time.

Sponsors of the statue unveiling ceremony:

Below are photos of the Pack of Dogs and an artist's conception of the Caesar sculpture.