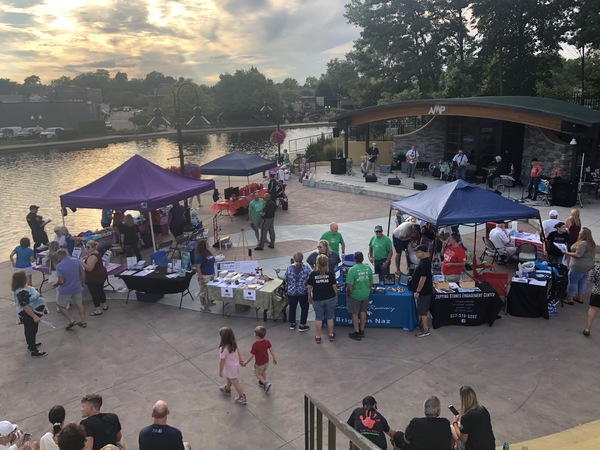 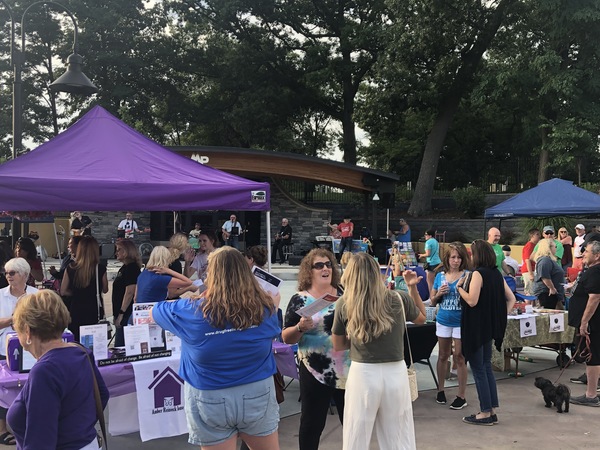 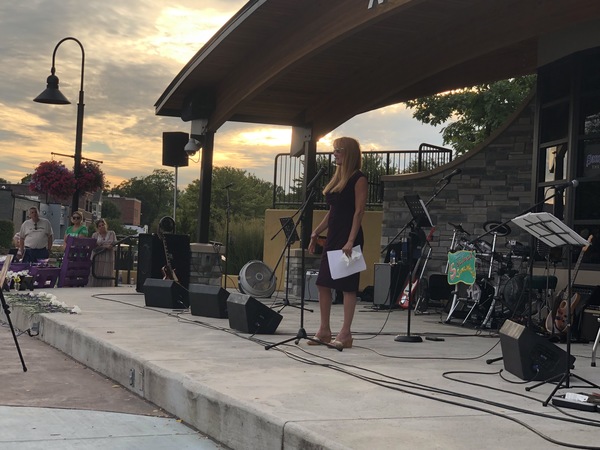 
A strong showing of residents turned out on a beautiful late-summer night in downtown Brighton to remember loved ones lost to addiction and to support those in recovery.

Tuesday was Overdose Awareness Day, which is the world’s largest annual campaign to end overdose, remember without stigma those who have passed, and acknowledge the grief of family and friends left behind. Nearly a dozen community organizations turned out at the AMP for this year’s event, hosted by the Amber Reineck House.

The many in attendance were entertained by live music as they got to browse the several resource booths and pay respects at a wall filled with portraits of loved ones who fell to addiction.

Multiple speakers took to the stage, including Lindsay Babiarz who shared the effects that heroin had on her life, and her story of recovery. Having been saved by Narcan 3 times and now a house mother at the Amber Reineck House, Babiarz encouraged anyone struggling to reach out. She said, “As women come through our door I will be a listening ear, the voice of encouragement, respect, and help them as much as I possibly can. I’m not saying the journey has been easy, but I can promise you it’s been worth it. Life is good and I’m grateful for the life I live today. Anyone struggling, please reach out; know that you’re not alone. You’re a warrior. You’re a fighter. There’s a light at the end of the tunnel and there is help for you, even if you feel helpless. I am living proof of it, and you can be too.”

Undersheriff Jeff Warder then took the stage and shared the difficult news that efforts at fighting overdoses have gone backwards since the pandemic began. In 2019, there were 52 in Livingston County, with 10 deaths. Those numbers, last year, rose to 318 and 21, respectfully. So far in 2021 there have been 2018 with 15 fatalities. Warder said it is a three-pronged approach needed beat this. They have to have enforcement, but enforcement alone won’t do the trick. The undersheriff said there also needs to be education and community support.

Rebecca Kiessling then shared a heart wrenching story of her 2 adopted sons who overdosed and passed away last year. There was a history of addiction in their birth mother’s family with several tragedies from it. She told the story of their struggles to kick addiction and stay clean while spending time in jail and trying to graduate high school. Kiessling read from letters her son Kyler, and then Caleb, wrote to her shortly before they died. Through tears she said Kyler wrote, “ I had the best childhood. You raised us right. I have so many good memories; we did so many cool things and went to cool places. I’m so lucky you adopted me.” She continued, “Caleb said, ‘Mom, you were my superhero. You’ve always been there for me, you always cared.’” Kiessling said that Caleb wrote asking that she “please, don’t ever abandon me,” with Kiessling then saying “And I told him I wouldn’t, but it’s hard, cause I feel like I did.”

Toxicology reports showed that the Percocet’s her son’s thought they were taking were actually 100% fentanyl, or “murder pills,” as Keissling put it. She warned that nothing on the streets is safe and that fentanyl is in everything.

Tim Wessel, who is a member of the Amber Reineck House Board, emceed the event, and asked that people “don’t give up” and “don’t stand still” in this battle, because “we are making a difference.”

The event wrapped up with the reading of names of those who have passed, and then there was a lighting of candles and laying of carnations in remembrance of them, and for supporting those still in the struggle.