Out Of The Darkness Walk Planned At Howell High School 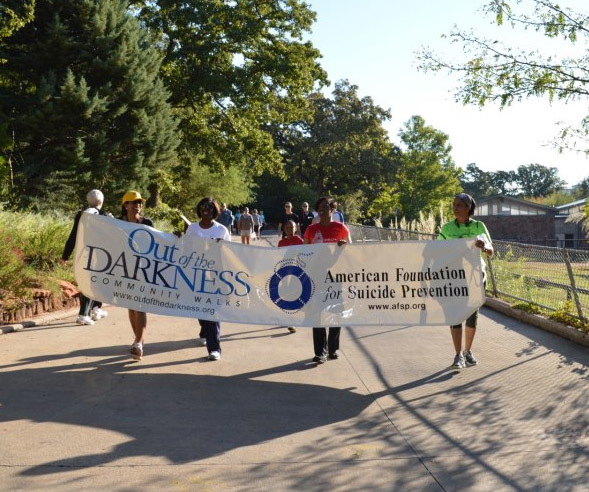 An upcoming event aims to shine a light on suicide prevention and awareness.

The Out of the Darkness Howell High School Campus Walk will take place on May 11th at the John Dukes Field. It’s described as a journey of remembrance, hope and support but also a time to acknowledge the ways that suicide and mental illness have affected lives and loved ones. The walks are the American Foundation for Suicide Prevention’s signature student fundraising series and designed to engage not only youth but the larger community and campuses across the country in the fight to prevent suicide. The Foundation has set a goal to reduce the annual suicide rate 20% by 2025. Suicide is the second leading cause of death among people age 15 to 24 according to parent Stephanie Harris, who co-chairs the walk with Gigi Jackson, one of the counselors at Howell High School. Stephanie’s son Ethan Johnson died by suicide on April 17th, 2017 and was a Howell High School senior. Harris tells WHMI the loss has been a lot but so has the gain in working with the Foundation and partnering with Howell High School. She says suicide prevention doesn’t get anywhere near the funding given to other leading causes of death so it’s up to walkers, students and the community to make a difference and reach the goal of saving lives and bringing hope to those people who are struggling with mental health issues.

Harris says suicide affects people of all ages, stages, economic backgrounds, races and religions and you never know when something could happen to someone you know or love. She says they never anticipated the loss of their child, nor do most people, so bringing awareness to suicide prevention is critical in stopping the tragic loss of lives. Harris says things like the upcoming walks help teach schools and communities about suicide prevention and awareness, which stops the stigma. In working with the Foundation, Harris says she’s learned that talking saves lives and it’s critical to have conversations all the time. Harris says there are so many risk factors and things that lead up to suicide that had she been educated, she might have seen those signs in her child so she’s passionate about sharing them. Harris says the stigma will sometimes prevent people from reaching out for help so the more it can be lessened, the more hope there is for the people struggling with a mental health condition and for the people who love them. She says this isn’t just a one-event situation but an impact situation as suicide will keep happening so they need to keep learning, educating and talking while coming together as a community.

Harris says the walk is not just for high school students but anyone to come and learn about suicide awareness and prevention or honor a lost loved one. She says everyone needs to work together at prevention, saving lives and bringing hope to Livingston County. She says 50% of funds raised from the walk go to research but the other half stays local and goes right back into Livingston County to educate and further suicide prevention awareness in local schools. The Out of the Darkness Walk will kick off with an opening ceremony at 10:45am, followed by the walk which Harris says is very short and accessible for anyone who wants to join. Community members are encouraged to form a team and raise funds or walk individually, become an event sponsor, or make a donation and show up on the day of walk. Several vendor booths will be set up featuring mental health professionals and Livingston County Community Mental Health will be joining the walk. A memory tent will also be on site where people can pay tribute to their lost loved one. Registration information can be found through the provided link. (JM)