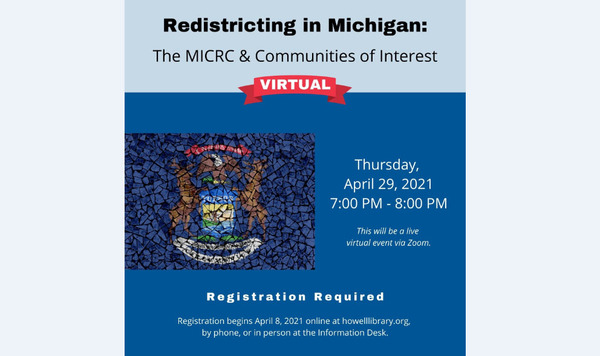 
The ongoing process to redraw Michigan’s political boundaries will be the focus of an event later this week.

The League of Women Voters of Brighton/Howell Unit is holding a town hall event this Thursday, April 29th at 7pm via Zoom, to educate Michigan voters on the Independent Citizens Redistricting Commission’s process in drawing new legislative and congressional maps.

The virtual town hall will feature Guest Commissioner M.C. Rothhorn, a Democrat from Lansing, and League representatives as they discuss redistricting in Michigan, the commission and opportunities for the public, including Communities of Interest, to provide input to the commission before it draws the maps.

The process has taken on added importance with recent data from the U.S. Census Bureau that show while Michigan’s population grew by 2% in the last decade, it will still lose one of its 14 congressional seats.

Michigan also lost a seat after each of the 2000 and 2010 censuses, but the redistricting process in each of those instances was controlled by Republican political majorities, which resulted in partisan battles between Democrats for a new consolidated district. With the process this time being guided by an independent commission, the result will not be as certain.

Ellen Lafferty, Chairperson of the local League chapter, says that redistricting in Michigan “has been a very political process that has historically taken place behind closed doors and out of the public” and that this “new independent process gives regular, everyday Michigan residents the ability to draw the state’s legislative districts.”

Lafferty says they want the public to be “empowered with information so they can participate in this important democratic process.”

Registartion is available by Clicking Here.