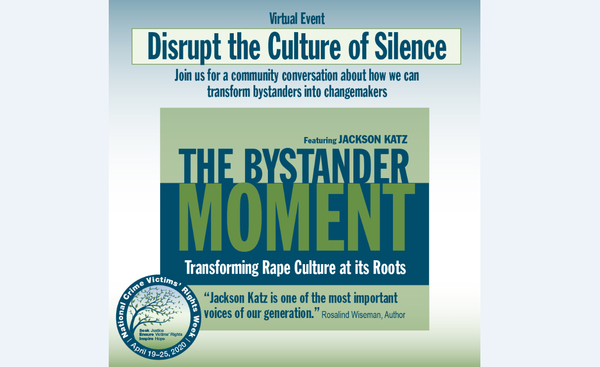 An online event next month will focus on disrupting the culture of silence about sexual assault.

LACASA Center will host the free virtual film event and live panel discussion on Thursday, June 25th via Zoom from 3:30 to 5:30pm. Called “The Bystander Moment,” the 50-minute documentary will be shown in recognition of National Sexual Assault Awareness Month. Organizers say the event was originally scheduled for April, but was delayed due to COVID-19. The screening is supported by the National Crime Victim’s Rights Week (NCVRW) Community Awareness Project.

According to a release from LACASA Center, the film highlights how the bystander approach helps prevent gender violence. Produced by international gender violence activist Jackson Katz and his colleagues, the documentary highlights the role bystanders can play in ending rape culture and preventing sexual assault. Following the film screening, an interactive panel discussion will be held. Local panelists include Nicole Denson from Equality MI; Matt Oliver from Cleary University and April Woods from Pinckney Community Schools; Bill Vailliencourt and Pamela Maas from the Livingston County Prosecutor’s Office; and Kristi Bell from the Brighton Police Department. The panel discussion will explore how people can disrupt the culture of silence and encourage bystander intervention through LACASA’s Mentors in Violence Prevention program and other awareness initiatives conducted at local high schools and colleges.

Following the panel discussion, awards will be presented to local individuals and agencies that have gone above and beyond to “seek justice, ensure victim’s rights and inspire hope,” the NCVRW theme for this year. Award recipients include the aforementioned panelists as well as Andrea Lipscomb of Lake Trust Credit Union and Nicole Mason of Chem Trend. Advance registration for the free event is required and can be completed at https://bit.ly/lacasafilm. Registrants will receive an invitation link to the Zoom conference via email once they sign up.

For more information about the event visit https://lacasacenter.org/virtual-film-event/