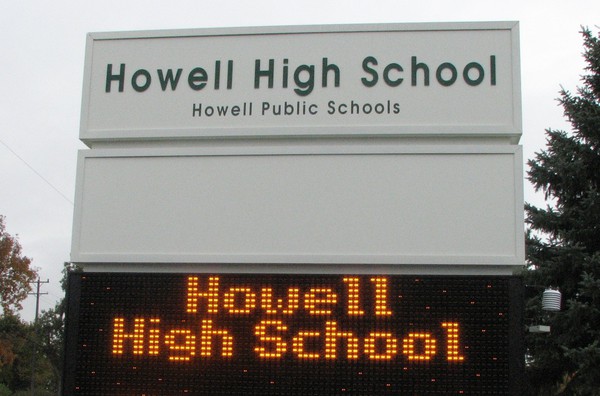 Local school officials are trying to reassure parents following a television news report about an individual who made some disturbing statements and internet searches.

WDIV in Detroit aired a story Monday about a 25-year-old man who they identified only as Mathew from Southeast Michigan. WHMI has since learned he is from the Brighton area. WDIV said they weren’t identifying him or showing his face as he isn't charged with making threats. However, their story highlighted concerns made by federal officials at a detention hearing. Hank Moon, the assistant U.S. attorney for the Eastern District of Michigan, says Mathew was charged in a one-count complaint with making false statements, specifically as they pertained to credit card applications made to purchase an assault rifle, several handguns, several 40-round, high-capacity magazines and a device known as a binary trigger, which he said was, “used only to ensure than an assault rifle will fire quicker than (designed by the) manufacturer” Moon also said Mathew, “asked the gun store how he can convert his AR-15 to a fully automatic rifle." That dealer, along with a neighbor, called authorities. The FBI then raided his home, confiscating his guns, phone and computer. Moon says that on the computer were pictures of at least two mass shooters, one from the Virginia Tech massacre in 2007 and the Columbine school shooting in 1999.

But it was his Google searches that convinced authorities to arrest Mathew. Among the terms he searched out was, “Columbine High School and then immediately searched, 'Howell Michigan High School.' He also searched out police response times to an active shooter. Moon told the judge, “…when we talk about red flags, your honor, these are literally staring us in the face." But after five months in jail and an evaluation by a medical professional that he was mentally ill, Mathew was released on probation after he pleaded guilty to wire fraud.

In response to WDIV’s story, Howell Superintendent Erin MacGregor sent out a message to district parents that while this individual had searched ‘Howell Michigan High School,’ they were briefed on the matter by local law enforcement, who assured them, “that no threat had been made against Howell High School or Howell Public Schools.” MacGregor says had it been otherwise, they would have taken immediate action. MacGregor added that he was, “reassured by the steps that law enforcement had taken relating to this individual and keeping our community safe. The safety of our students and staff is our top priority and we will never jeopardize that.” You can see the full communication below.

As for Mathew, because he is a convicted felon, he cannot legally own weapons, and while he is allowed to go online, those actions will be monitored by law enforcement agencies for the next five years. Livingston County Sheriff Mike Murphy told WHMI that “We will be working with the FBI to ensure that he meets the terms of his probation.” (JK)