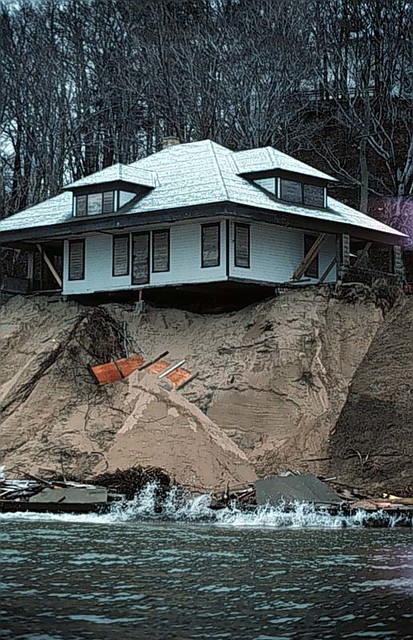 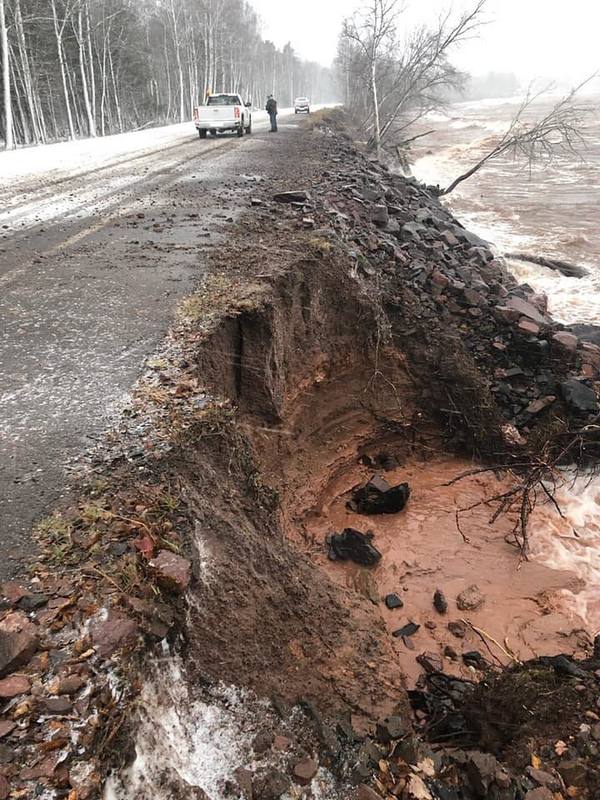 
Homes plunging into the Great Lakes, cliffs falling, beaches being washed away, devastating waves and flooding – it sounds more like something out of a superhero movie but this is just 2020 and reality in Michigan. The trend is only expected to continue – leading to more coastal erosion and lakeshore flooding concerns.

The U.S. Army Corps of Engineers Detroit District monitors Great Lakes water levels. The Corps is urging those impacted by high water levels in 2019 to be prepared for similar or higher levels again this year. In January, record highs were broken on Lakes Superior, Michigan and Huron while Lake St. Clair tied its record high January level that was set back in 1986. Overall, above or very close to near records is being forecast for the next six months. Strong storm systems and resulting large waves have led to substantial beach, dune and bluff erosion along much of the Great Lakes coastline. Homes and businesses are flooded, some lakefront homes are falling in and roads and beaches have been washed away. Indiana has seen millions of dollars in road damage from the Great Lakes' high levels and several lakeshore communities have already declared local beach erosion emergencies. On Mackinac Island in Lake Huron, portions of the only paved road washed away from erosion following high water and waves. Emergency management officials from Allegan and Ottawa Counties have been cataloging shoreline homes at risk. More than 200 structures in eight counties are considered at risk with around 18 of those said to be 10 feet or less from falling into a lake. The Michigan Department of Environment, Great Lakes & Energy or EGLE has been streamlining the permit process for those trying to save their homes by pursuing shoreline protection measures and things like new and higher seawalls. It’s issued more than 400 permits but in some cases, experts say it’s actually less expensive to just demolish a home. There’s no relief in sight and further damage is expected with spring snowmelt, increased rainfall and runoff.

There have been impacts throughout the entire region and state, which varies from flooding to more severe erosion impacts depending on the community according to Deanna Apps, a Physical Scientist with the Corps’ Detroit District. Apps tells WHMI there’s been widespread impact that varies depending on the community and property along the Great Lakes, as well as the location of the shoreline. She says high lake levels have already led to flooding in various communities, sandy bluffs sinking and erosion impacts throughout the entire Great Lakes basin over the last year. Apps says large rises on the lakes began last spring and since then, especially in the fall and early winter, there were some strong storm events and large waves that caused significant impacts throughout state and region. Apps advises that people be prepared for more high water again this year and any impacts but also be cautious near shorelines. She says we’re in a similar situation as last year, if not worse, in some scenarios where we’ll potentially be above records so she emphasizes that as a cautionary note. She says those planning summer vacations should take note because a lot of things in certain places people visit might be gone and in some spots, there isn’t much of a beach anymore. She says depending on where you’re traveling, it would be wise to check out impacts in local areas because the higher water is causing significant erosion and flooding. Apps says the water is much higher so if there was ten feet of beach few years back, it could be gone now.

Apps says the Great Lakes are typically around their seasonal low this time of year - late winter and early spring is when water levels start to rise due to increased rainfall and warm weather resulting in increased runoff from snowmelt. Levels usually peak in the summer and then typically decline in the fall due to evaporation. Apps says Lakes Michigan and Huron actually set a record low in January of 2013 – so from then to January 2020, the lakes went from a record low to a record high in just about seven years. In 2103, she says we did start to see levels rise out of that low water period and since then, there’s been a consistent wet pattern in the region. Over the last year, in 2019, Apps noted the states of Michigan and Wisconsin both experienced their wettest years on record and that’s based on data that goes back about 120 years.

With the last few months being warmer than normal, Apps says there has been increased runoff but especially in January. She says with how saturated the soil is, precipitation just runs off directly into rivers and lakes. Apps says warmer than normal temperatures can reduce evaporation, which limits some of the water level decline. She adds we have seen below average evaporation in December and January. Apps says the Corps tracks a lot of meteorological variables but the main ones are evaporation, runoff and precipitation. She says they also realize surface temperatures play a role in ice cover and just temperature in general plays a role in all of these things. Apps says there has been a wet pattern over the past several years and they’ve seen water levels rise but to attribute it to a longer term climate change is very uncertain. She noted there are many variables that impact water levels and they recognize the pattern we’re in but to know how it plays out in the future is hard to tell. (JM)