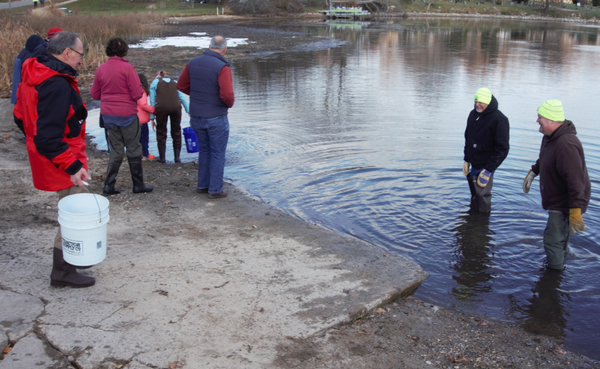 You’ll have to cut a hole through the ice to get at them, but the pike population in Thompson Lake in Howell was recently re-stocked.

A news release from the Livingston County Drain Commissioner says they and residents of Thompson Lake gathered at the boat launch November 21st to stock the lake with 250 northern pike. The volunteers, who included State Representative Hank Vaupel and then State Representative-elect Ann Bollin, put on waders and transferred the fish to the lake one bucket at a time.

Thompson Lake is stocked with pike every other year as a requirement of a 1984 Court Order, which sets the elevation of the lake and allows the lake to be lowered every other year. The order specifies stocking of northern pike in an effort to offset adverse impacts to the spawning habitat that may occur when the lake level is lowered. The Drain Commissioner’s office extended thanks to all those who participated in this year’s stocking event. (JK)