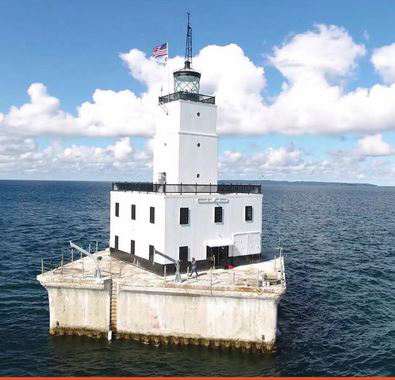 
A non-profit group with local ties has successfully restored a lighthouse to begin offering tours this summer.

The North Manitou Light Keepers were able to successfully meet a five-year goal to start tours out to the North Manitou Shoal Light, which is also referred to as The Crib. Dan Oginsky of Brighton is president of the non-profit’s Board of Directors. In 2016, the lighthouse, which is located near the Manitou Islands in Leelanau County in Lake Michigan, went up for auction by the federal government. Oginsky said they were struck by the idea of restoring the lighthouse, formed the non-profit called The North Manitou Light Keepers, bid on it, and won it. He says they then set a five-year goal to restore it enough to start tours and were successful.

Oginsky's affinity for lighthouses and historic restoration is obvious. In April, he and wife Anna officially opened the Brighton Lighthouse, a new co-working and community space at 142 Brighton Lake Road. The Oginskys purchased and restored the historic home, which was built in 1862.

As for the North Manitou Lighthouse, Oginsky told WHMI it was in really rough shape five years ago, noting it’s still of functioning age for navigation but the Coast Guard pulled crews off in 1980 and automated the equipment. Since that time, he said it was left rusting and deteriorating. He says the lighthouse was cleaned up and hazardous material was removed before it was sandblasted and given a fresh paint job. 22 rectangular windows that were original from 1935 were restored and re-installed so there’s now daylight coming into the tower.

Oginsky says they’ve come a long way in five years from the lighthouse being in really rough shape to being clean, safe, and suitable for tours. He says tours kicked off June 19th and take about 2 ½ hours. Oginsky says people sign up and meet at a harbor in Leland before going out on a fishing charter boat for a roughly 20-minute ride to get out to the lighthouse. He says people spend about an hour touring around and learning history while seeing what he described as some of the world’s greatest views with Lake Michigan, the Islands, and then looking back at Sleeping Bear Dunes National Lakeshore.

Oginsky says they’re about halfway through the full restoration and have invested around $600,000 so far that came from contributions and state grants and fundraising efforts. He says they have about that amount left to go when it comes to installing mechanical systems and other fix-ups to fully protect it from the elements and make it suitable for overnight or weekend stays.

Oginsky says completion of the second phase will depend on fundraising and they’ll be looking for more grants and kicking off the next phase of a capital campaign to help finish the restoration. He will be a guest Sunday at 8:30am on WHMI's Viewpoint.

More information is available online through the provided link.